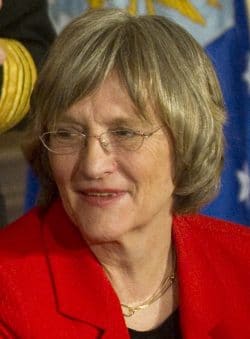 Harvard’s president recently announced that she intends to resign at the end of next year.

As we wrote yesterday about the presidents of the eight Ivy League universities — and how four of these presidents happen to be female — we figured we’d report on the announced resignation of Harvard’s first female president, Drew Gilpin Faust. Faust recently announced that she intends to step down from the top spot at Harvard at the end of next year, at the culmination of her eleventh year leading the elite institution. For those who may have forgotten, Faust succeeded Larry Summers as Harvard’s president, a man who despicably — and erroneously — suggested that women may lack an intrinsic aptitude for math and science. And while Summers would issue an apology to the Harvard community in the wake of his incendiary comments, it was only fitting that a woman would succeed him. The first in Harvard’s storied history.

As reports Stephanie Saul for “The New York Times” in a piece about the Harvard president’s intended resignation, “Dr. Faust, a well-liked historian known for her scholarship on the American South, was appointed in 2007 after a turbulent period in which her predecessor, Lawrence H. Summers, an economist and former Treasury secretary, alienated significant portions of the faculty. The gracious Dr. Faust, in some ways an unlikely choice to lead the university because she did not attend Harvard, was viewed as the antidote to Dr. Summers’s pugnacious style. Moreover, the selection of a woman — after Dr. Summers’s controversial suggestion that women might lack an aptitude for science and math — appeared to usher in a new era.

The piece goes on, “Indeed, Dr. Faust is credited with increasing the university’s ethnic and economic diversity, partly by expanding its financial aid program. Harvard, founded in 1636 and once considered an institution only for the elite, remains tilted toward the wealthy, including many children of alumni. But one in five undergraduates today comes from a family with income below $65,000 a year, and those students attend free, according to the university. The percentage of students who identify as African-American grew modestly during Dr. Faust’s tenure, to 10 percent from 8 percent, according to Harvard data. The percentage of Latino students also increased.”

It will be interesting to see who Harvard selects as its next leader. Here’s hoping this leader continues in shaping the grand vision of Dr. Faust — a Harvard University that is more open and more inclusive to people of all backgrounds no matter their ability to pay.