A couple of months ago, we were very critical of the Harvard University administration for not being among the national leaders in fighting for LGBT student rights. Harvard, unlike its Ivy League peers, doesn’t rank near the top of the Campus Climate Index. The university doesn’t even have an appropriate resource center for Harvard LGBT students. 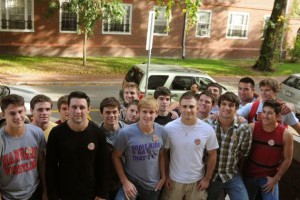 But Harvard LGBT students got a boost today from members of the Harvard Men’s Wrestling team. For National Coming Out Day, Harvard wrestlers wore t-shirts and pins in support of Harvard LGBT students. As reported by “Towleroad,” “Said team captain Walter Peppelman in a press release obtained by Towleroad: ‘The Harvard Wrestling family believes that it is important to send a message of hope, love, and acceptance to the Harvard community. Today is also an opportunity for us to begin to break down some of the negative stereotypes attached to our sport and to athletics in general. We want to show that the members of Harvard Wrestling love and respect individuals for who they are, regardless of their sexual orientation and pledge to do our best to make them feel at home at Harvard.'”

Wow. Go Harvard wrestlers. What a wonderful way to inspire your administration to get their act together like the rest of the Ivy League colleges. If you’ll remember, several years back, the Dartmouth Men’s Lacrosse team wore gay friendly t-shirts and pins as well on National Coming Out Day. They did that in support of their gay All-Americcan lacrosse goalie who ended up becoming the first male professional team sport athlete in North America to be openly gay during his playing career.