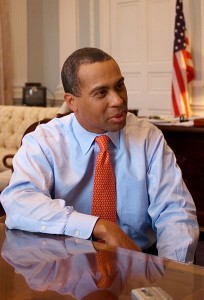 It’s always a competition to see which colleges will end up with the best commencement speakers each spring. Harvard has shown its hand early this year. Former Massachusetts Governor Deval Patrick will be Harvard’s commencement speaker this spring, it was announced by Harvard. Drew Faust, Harvard’s president, had this to say about the selection of Governor Patrick to headline commencement, as quoted in “The Harvard Gazette”: “Deval Patrick is an extraordinarily distinguished alumnus, a deeply dedicated public servant, and an inspiring embodiment of the American dream. We greatly look forward to welcoming him home to Harvard on Commencement Day.” Governor Patrick is a graduate of both Harvard College and Harvard Law School so it’s indeed a homecoming of sorts.

As quoted in “The Harvard Gazette,” “‘It’s an honor to have Governor Patrick return to campus to share his life experience with the newest members of the Harvard Alumni Association,’ said Cynthia Torres ’80, M.B.A. ’84, president of the alumni association. ‘From his youth on the tough streets of Chicago’s South Side, he went on to attend Harvard College and Harvard Law School, and was twice elected to the highest office in our nation’s oldest commonwealth. His distinguished career continues a longstanding tradition of Harvard alumni in public leadership. We look forward to hearing him share his insights with our graduates, alumni, and friends.'”