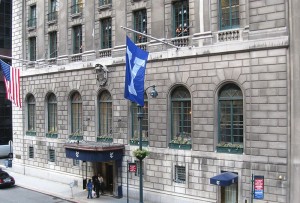 The Yale Club is pretty cool. But we’re not fans of its swimming pool. It’s not long enough for real swimmers!

One of the many benefits of attending certain highly selective colleges is the opportunity to be a member at a club in New York City such as the Harvard Club or the Yale Club. If you’ve never heard of these clubs, maybe you’re not a “Law & Order” fan. Fred Thompson would often dine in establishments like the Harvard Club during his stint on the now defunct flagship Dick Wolf series. These clubs are very cool. When you walk in, they just smell like old money. These are not establishments of the nouveau riche. These are establishments of old money Ivy League elites.

Want to impress a potential client? A lunch at the Harvard Club of NYC (where wearing jeans is absolutely not permissible) can do the trick. Want to play a game of squash with an employee? Bring him to the Yale Club (graduates of Dartmouth College and the University of Virginia can also belong to the Yale Club in New York City, by the way). If you’re wondering, the Yale Club is located on Vanderbilt Avenue, right near Grand Central Terminal. It consists of twenty-two stories. You read that correctly. It has two bars, three dining rooms, a ridiculously small pool with a fancy ceiling (hey, we’ve swam in it and it’s kind of a silly length), and much more.

Located in Midtown Manhattan, the original wing of the Harvard Club was built in 1894. It was designed by Charles Follen McKim in a red brick neo-Georgian style and the club happens to include a number of dining rooms, game rooms, a bar that Harvard grads take full advantage of, and even a business center. If you’re not a Harvard grad, you can try sneaking in to check it out but security is pretty tight. Anyhow, we’ll be writing more about these great clubs in the coming weeks. And, yes, Columbia, Princeton, Cornell, and Penn have clubs in New York City as well. We’ll be writing about these clubs, too!