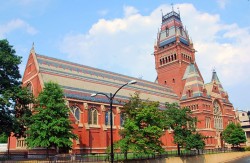 Harvard is facing a lawsuit in which the claimants assert the university discriminates against Asian Americans in their admissions practices (photo credit: Chensiyuan).

We’ve written before on the pages of this college admissions blog about the lawsuit facing Harvard University as it relates to discriminatory practices in admissions — concerned Asian American applicants. The case has not gone away. Rather, it’s progressing slowly. Harvard’s legal team (no, it does not include Reese Witherspoon from “Legally Blonde”) has argued that the case should be delayed until the Supreme Court reaches a decision in the Fisher v. University of Texas at Austin case, the biggest college admissions legal case on any court’s docket at the moment.

“The Harvard Crimson” has an update on the case against Harvard, as reported by Aidan F. Langston: “In the last month, lawyers for both sides have filed a combined total of four motions to seal documents, according to court records. Judge Allison D. Burroughs, who is presiding over the case, is thus able to view unredacted copies of documents containing sensitive information. Information about Harvard’s admissions process, as well as excerpts from testimony by Harvard Director of Admissions Marlyn E. McGrath, have been redacted from the publicly released versions of those letters. Edward Blum, the president of Students for Fair Admissions, said the discovery process has been ‘pretty garden-variety.’ Specifically, Blum criticized Harvard for withholding information about the role race plays in its admissions process while requesting information about the unknown claimants behind the lawsuit.”

We’ve been quite vocal in the press as well as on this blog that lawsuits such as these are rather frivolous. Do we believe Asian Americans face discrimination in highly selective college admissions? You bet. And Asian Americans deserve better (as do Asians). But lawsuits are not the cure-all to this discrimination. Not even close. While it may have ultimately been the Supreme Court of the United States to rule in favor of marriage equality in America, the court’s decision came after a groundswell of support for equality across the land became impossible to ignore any longer. Our point in making this analogy is that Asian Americans need that groundswell of support before trying to take a school such as Harvard on in court.