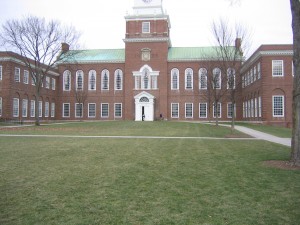 Fewer students applied Early Decision this year to Dartmouth than in the past few years. But does that indicate that the university has a weaker applicant pool than last year when they had an all-time high of applicants? No. Definitely not. We’ll explain why.

Why do you think Penn saw an increase in Early Decision applications? And why did Dartmouth see a decrease? Does that mean that it will be easier to get into Dartmouth this year as compared to last year? Absolutely not! Just because fewer applicants apply, that doesn’t mean the applicant pool is weaker. ‘C’ students who apply don’t make an applicant pool stronger by any means. The sheer number of applications is not the mark of a competitive applicant pool (unless the applicant pool falls to ridiculous lows). Remember, colleges — even highly selective ones — have a tendency to recruit students who they know can’t get in just to boost their applicant pool. So this does indeed speak to a bad marketing year for the Dartmouth admissions office (at least in the Early round), but it doesn’t necessarily speak to a weaker Early applicant pool. That’s an important distinction.

Harvard and Dartmouth Face Off