Dreaming of the Ivy League 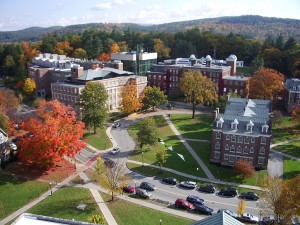 Be a doer rather than a dreamer, said Shonda Rhimes at this year’s Dartmouth commencement ceremonies.

Shonda Rhimes, creator of some of the seminal television series of the past decade that have shaped the zeitgeist as we know it — including “Grey’s Anatomy,” “Private Practice,” and the red hot “Scandal,” gave a commencement address this past Sunday at Dartmouth College that we wanted to share with our readers. The message that Shonda puts out there in her own, always unique way is an important one that certainly applies to the highly selective college admissions process as well. In the speech, Shonda tells the graduating class to be doers rather than dreamers. Shonda explains that she dreamed of being the great American author Toni Morrison. But since Shonda has become one of the most powerful women in America, she has had a chance to have a meal with Toni Morrison. And all Toni Morrison wanted to discuss with her was “Grey’s Anatomy.” Fancy that.

You can dream or you can do. Shonda, a Dartmouth alumna herself, chose to do and because of that, she has become the voice of a generation through Meredith Grey and Olivia Pope. Many students and parents approach us who dream of attending Harvard, Princeton, Dartmouth, Yale, and a host of other highly selective colleges. That’s nice. Who wouldn’t dream of attending an Ivy League school? But we say…quit dreaming. As Malcolm Gladwell would tell you, put 10,000 hours into an activity to become a master, ace those ACTs or SATs. Take the most challenging courses your high school offers (and then some). And get great grades in those courses. Be a learner with an insatiable appetite for knowledge. Write remarkably powerful college admissions essays.

Don’t dream of going to Yale and spend your time watching “Scandal.” Let everyone else watch “Scandal.” While they’re busy watching “Scandal,” spend 10,000 hours learning to become a master coder. Or a science researcher. Or a basketball player with a crisp three-point shot ala J.J. Reddick. Be a doer. Not a dreamer. Dreamers are lame. Los Angeles coffee shops are full of them.