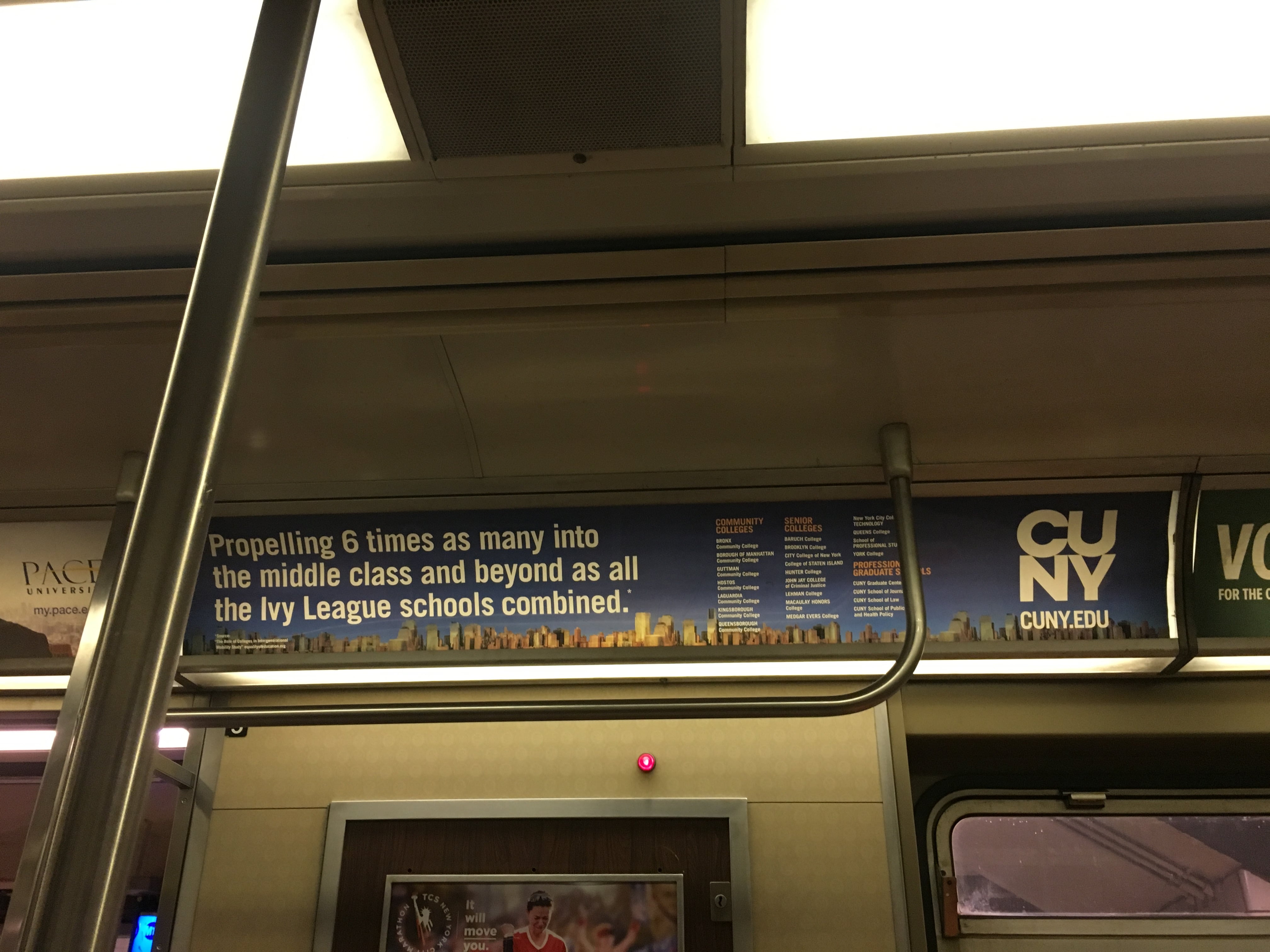 Have you seen this advertisement on a NYC subway?

Ivy League colleges love to tout the percentage of students in their incoming classes who will be the first in their families to attend college. This is a coveted group for not only the Ancient Eight institutions but for all highly selective colleges in America. These students embody a principle that these schools hold dear — that an education from an elite institution can help low-income students rise to the middle class and beyond. But just how successful are the Ivy League colleges and other highly selective schools in helping students rise to the middle class and beyond? Let’s find out.

The Role of Colleges in Intergenerational Mobility Study

If you’ve packed into an overcrowded New York City subway car of late, you may have seen an advertisement by the CUNY schools (City University of New York) that reads, “Propelling 6 times as many into the middle class and beyond as all the Ivy League schools combined.” If you haven’t seen it, we’ve included an image of the ad above. It’s certainly a compelling statement and it does cite a source — a paper entitled “Mobility Report Cards: The Role of Colleges in Intergenerational Mobility” authored by Raj Chetty, John N. Friedman, Emanuel Saez, Nicholas Turner, and Danny Yagan. Interestingly, the study’s authors work for Stanford, Brown, UC Berkeley, the U.S. Treasury, and UC Berkeley, respectively. So they’re representing some of America’s most elite universities, universities that have a stake in this race.

As the authors write in the paper’s abstract, “We characterize intergenerational income mobility at each college in the United States using data for over 30 million college students from 1999-2013. We document four results. First, access to colleges varies greatly by parent income. For example, children whose parents are in the top 1% of the income distribution are 77 times more likely to attend an Ivy League college than those whose parents are in the bottom income quintile. Second, children from low and high-income families have similar earnings outcomes conditional on the college they attend, indicating that low-income students are not mismatched at selective colleges.”

They go on, “Third, rates of upward mobility – the fraction of students who come from families in the bottom income quintile and reach the top quintile – differ substantially across colleges because low-income access varies significantly across colleges with similar earnings outcomes. Rates of bottom-to-top quintile mobility are highest at certain mid-tier public universities, such as the City University of New York and California State colleges. Rates of upper-tail (bottom quintile to top 1%) mobility are highest at elite colleges, such as Ivy League universities. Fourth, the fraction of students from low-income families did not change substantially between 2000-2011 at elite private colleges, but fell sharply at colleges with the highest rates of bottom-to-top-quintile mobility.”

So, to put the study’s findings in more simple terms, the rich are more likely than the poor to send their children to Ivy League colleges. Not so shocking. Students from low-income families who attend an Ivy League college will make about the same amount of money in their lifetimes as students from wealthy families who also attend these schools. If that doesn’t signal that an Ivy League education can help low-income students rise to the middle class and beyond, we wonder what does?

However, it’s the mid-tier schools (here’s where CUNY comes in!) that help the most low-income students rise to the upper echelons — though the Ivy League schools are more likely to help these students rise to the very top of that echelon (the top 1%). And, finally, it seems our nation’s most elite schools aren’t getting much better at inspiring these students to attend these institutions. So there’s, of course, more work to be done.

In summary, the Ivy League colleges do indeed foster upward mobility. They help many low-income student reach the very top of the earnings bracket. But the mid-tier schools, like the CUNY schools, help more low-income students reach the middle class and beyond. So CUNY’s advertisement is absolutely true and it’s up to the Ivy League colleges and other highly selective institutions to work to change this trend.

Do these findings surprise you? Or are the findings kind of a “duh”? Let us know your thoughts, your musings, your questions, your concerns, and more by posting a Comment below. We look forward to hearing from you.