We’ve highlighted in the past the remarkable work of Dartmouth College head football coach Buddy Teevens. Not only has he delivered Ivy League championships to Dartmouth as both a player and coach, but he’s quite literally changed the game — not only in Hanover, New Hampshire but across the land. Along with two Dartmouth engineering students, Teevens created the Mobile Virtual Player, robotic dummies that allow players to practice tackling without getting a second party hurt in the process. The MVP can weave, cut, you name it. It mimics the actions of a real-life football player. And as awareness spreads about the dangers of concussions in the sport of football, the MVP sits at the precipice of changing the game forever. 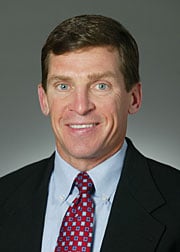 During tonight’s come-from-behind, epic Super Bowl game, there happened to be a spot on Buddy Teevens’ MVP, which we thought was pretty cool. More football coaches across America need to use the MVP. More football coaches across America need to ban player-on-player tackling in practices — just as Buddy Teevens did years ago at Dartmouth. There’s already too much opportunity for serious injury in the course of games. There’s no need to amplify that risk by asking players to tackle players in practices. Buddy Teevens was nothing short of a visionary when he began the revolution of how football is to be played.

We’re glad to see the MVP getting publicity on the world’s largest stage — during a Super Bowl commercial. May word spread that tackling in practices is unnecessary thanks to the Mobile Virtual Player created in the green mountains of New Hampshire.

Congratulations to Coach Teevens and Dartmouth College on their important work in changing the game of football! And be sure to check out the spot on the MVP.