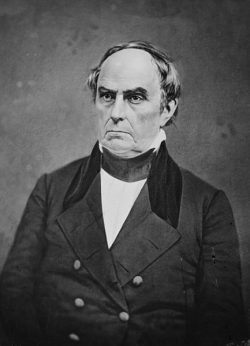 Daniel Webster forgot to smile for this portrait!

“It is, Sir, as I have said, a small college. And yet there are those who love it.” Daniel Webster uttered these very words before the United States Supreme Court in 1819 in a landmark Supreme Court case, Dartmouth College v. Woodward, a case every high school U.S. history student studies. And while Dartmouth College is a small college, it is also a university with graduate schools in medicine, business, and engineering, among other fields of study. A piece this week in “The Dartmouth, ” one in which Ivy Coach is cited, discusses how Dartmouth is currently weighing the merits of maintaining its small college feel with the merits of expanding its student body.

Dartmouth College Is A University

While Dartmouth has stayed true to its roots by remaining Dartmouth College in name, make no mistake that Dartmouth College is a university. As Fredman writes in a piece entitled “‘For the College on the Hill,'” “Bev Taylor, founder of the college admissions consulting firm Ivy Coach, said that Dartmouth is undoubtedly a university, but it calls itself a college because of tradition. ‘If people don’t get that Dartmouth College is a university, well so be it,’ Taylor said. She added that students looking for a really small college setting would probably not choose Dartmouth one way or the other. Taylor said that Dartmouth’s choice to consider increasing class sizes is a matter of keeping up with the times, as peer institutions like Princeton, Stanford and Yale have recently done so, and that it offers an opportunity for the College to accept a better group of students. ‘Accepting a larger class, accepting more students, will add to the diversity of the College,’ Taylor said. ‘And I believe that this is a primary goal for all of these colleges that are considering this move.’ She added that highly selective schools like Dartmouth often claim after admissions seasons that they regret not being able to accept more talented students.”

A new task force has been put together at Dartmouth that will consider the merits of increasing the size of the student body by 10 – 25%, which would of course be a major jump for the College on the Hill. This new task force will examine everything from housing to classroom space to issues of identity. After all, increasing the size of the student body to such an extent could theoretically change the feel of the school. It may not feel like such a small school after such a significant spike in numbers. And that wouldn’t necessarily be a good thing for an institution that prides itself on its intimacy in the mountains of New Hampshire — and on its undergraduate teaching. But Dartmouth has of course grown since its inception and the institution still has that small school feel…so maybe increasing the size of the student body wouldn’t have as dramatic an impact on the school’s feel as one might think?

Let us know your thoughts on expanding the size of the Dartmouth College student body by posting a Comment below. We look forward to hearing from you!