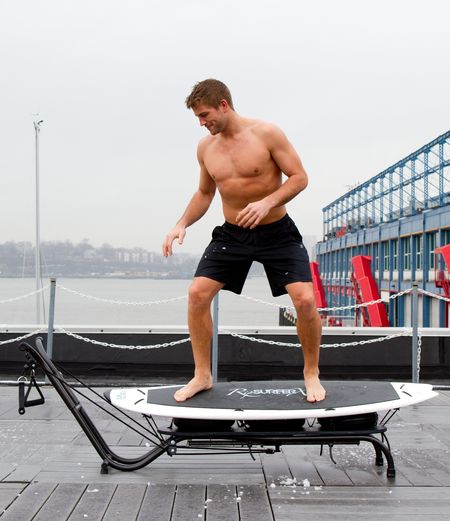 At Ivy Coach, we always love to bring successful Ivy League startups to your attention. Maybe it’s because a Princeton professor erroneously claimed that the Ivy League isn’t exactly a breeding ground for entrepreneurial spirits and we like to prove her wrong so very much. Or maybe it’s because we — as entrepreneurs ourselves — just love to support fellow Americans building their own businesses. Back in September, we highlighted Surfset Fitness, a startup founded by a very handsome Dartmouth College entrepreneur — Mike Hartwick. When Mike brought his company, Surfset Fitness, onto ABC’s hit show “Shark Tank,” he secured a major investment from billionaire entrepreneur and Dallas Mavericks owner Mark Cuban.

Mike’s company is a surfboard that he basically converted into a piece of exercise equipment (it’s very cool and we’re not exactly doing it justice with this description). They’ve got classes where folks can jump up on the specially designed board and work their abs (indoors) under the supervision of certified Surfset Fitness trainers. Anyhow, after securing the investment from Mark Cuban, Hartwick’s company has taken off, according to a recent update on “Shark Tank.” Based on the update, Surfset Fitness is on target for about $5 million in sales this year. Before Cuban’s investment, they were only grossing a couple of hundred thousand a year. So this is a major leap for the company.

We congratulate Mike, a former standout hockey player for the Big Green, and Surfset Fitness on their enormous success and we hope that their story inspires many other twenty-somethings to start their own businesses. And should Mike want to offer us some free classes in Venice, California in exchange for all of our publicity for his company, we suppose we’ll accept them as it looks cool!