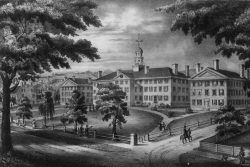 In all, 1,999 students applied Early Decision to Dartmouth this year.

The Early Decision numbers are in at Dartmouth College for the Class of 2021. In all, a record 1,999 students applied for admission to the College on the Hill (falling one short of 2,000 applicants must’ve been a little frustrating but it was a record nonetheless!). Of the 1,999 students, 555 were sent offers of admission. And unlike for Tulane University, Dartmouth College wasn’t kidding about any of them. Too soon? We blog about college admissions every day. We’ve got to add some color every now and then.

As reports Noah Goldstein for America’s oldest college newspaper, “The Dartmouth,” “The admitted students will form around 47 percent of the incoming class. Compared to last year’s early decision admits, the Class of 2021 had a higher number of students in the top 10 percent of their high school classes in addition to higher average scores on the ACT and SAT. This year’s 27.8 percent acceptance rate is an increase from last year’s 25.6 percent. The overall number of applications went up by 3.7 percent.”

In light of record application numbers and a strong pool at Dartmouth College this fall, we fully anticipate that the interim tag on Interim Dean of Admissions and Financial Aid Paul Sunde’s title to be removed. The job should be his!

So just less than half of the Class of 2021 at Dartmouth College is already full. If one doesn’t understand the importance of applying Early, think about it like this: You like pizza. You order a pizza. A passerby eats just a little less than half of the pie. You only have so many slices left to eat. But you still really like pizza. And not EBAs pizza. That’s a Dartmouth reference. EBAs is prized at Dartmouth for delivering pizza late into the night — not so much for the quality of their pizza. But enough about pizza.

As Goldstein reports, “Fifty-two percent of the students have applied for financial aid—up from 48 last year—while at least 11 percent are eligible for Pell Grants. There are students from 45 states in addition to Puerto Rico and the District of Colombia alongside 22 countries, with the largest number of students hailing from California. Thirty-four percent of the students attend independent schools, 13 percent attend religion-affiliated schools, and two of them have been home schooled.” 45 states — not bad. Look for applicants from the other five states to have an easier time of it during the Regular Decision round than most! Congratulations to our students at Ivy Coach who earned admission to Dartmouth College this year!