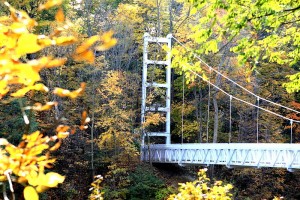 It seems like a Cornell dean of students needs to take a long walk around Ithaca to clear his head (photo credit: Justin Ennis).

Universities across the United States tend, overwhelmingly, to be liberal. The highly selective universities across the United States — like the Ivy League universities — tend to be among the most liberal among them. This is not opinion or conjecture. There are lots of studies to back up this claim. Google it. We happen to believe that extreme liberalism — and extreme conservatism — are bad and that America’s most prestigious universities should offer balanced perspectives from both sides of the aisle. Anyway, where are we going with this, you ask? Well, we’d like to address recent statements made by Cornell University’s assistant dean of students, Joseph Scaffido.

If you’re not familiar with the interview conducted by “citizen-journalist” James O’Keefe, O’Keefe, posing as a Moroccan student named Ali, discusses his interest in beginning “a humanitarian group that supports distressed communities in northern Iraq and Syria,” as according to a piece on the Cornell dean up on “Yahoo News.” As O’Keefe tells Cornell’s dean, as reported by “Yahoo News,” ‘”I think it would be important for especially these people in the Islamic State in Iraq and Syria, the families and the freedom fighters in particular and their families,’ he says. ‘I think it would be important to maybe just probably educate, but to maybe send them care packages whether it be food, water, electronics.'” And the dean’s reaction? “Scaffido nods along, responding that ‘there are a lot of our student organizations that do things like that all over the world.'” He goes on to say, “The university is not going to look at different groups and say you’re not allowed to support that group because we don’t believe in them or something like that. I think it’s just the opposite. I think the university wants the entire community to understand what’s going on in all parts of the world.” Oy!

Look, it is clear that Cornell’s dean was duped. James O’Keefe was clearly seeking a “gotcha” moment. That was the intent of his video. And he likely edited the video so as to make Cornell’s dean appear even more ridiculous. But that doesn’t change the fact that a Cornell dean is essentially voicing support for ISIS. If his defense is that he didn’t realize that ISIS was being discussed, then he has no clue what is going on in the world and, if that’s the case, what business does he have being a dean at an Ivy League school? Tolerance and acceptance should not include tolerance for terrorist organizations. While the dean may have been caught in a “gotcha” moment, as a dean of an Ivy League college, his statements are, without question, rather embarrassing for Cornell and hopefully not reflective of other professors and deans at this esteemed university.