When you think of associating a university with Google, you’d probably be inclined to think of Stanford University. After all, Google co-founder Larry Page received a Master of Science in Computer Engineering at The Farm. And Google co-founder Sergey Brin began a Ph.D at Stanford. It was there, during a new student orientation, that the duo first met. Stanford, in many ways, was the birthplace of Google just as it has been for so many other Silicon Valley companies. And while the Stanford and Google tie is a deep one, Cornell and Google are forming a new partnership. Google will be lending (for free) Cornell University quite a bit of space in their Chelsea offices as the university builds its new applied sciences campus on Roosevelt Island. In fact, Larry Page talked about it quite a bit last night on “Charlie Rose.” 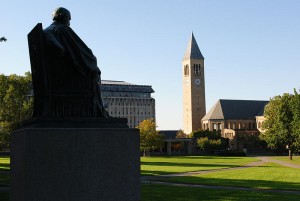 Google will be lending Cornell University quite a bit of free space in their Chelsea offices (photo credit: Eustress).

According to an article in “NY1” on Cornell and Google, “Speaking in Google’s New York headquarters in Chelsea on Monday, Page said his company is giving Cornell 22,000-square-feet of office space, to give the university a temporary home until its new applied sciences campus is finished on Roosevelt Island. That initial gift is just the beginning. As Cornell grows over the next few years, Google says it will give the school up to an additional 58,000-square-feet. Page estimates the gift is worth more than $10 million. The free office space may be a boon for Cornell’s bottom line, but it raises questions about how cozy the relationship should be between an academic institution and a for-profit company.”

Do you think that universities shouldn’t be so cozy with major corporations? Or do you think it’s good for the economy? Do you think there will be more Cornell University students under employ at Google in the coming years because of this arrangement? What do you think is in it for Google? Let us know your thoughts on these questions by posting below!