In previous posts, we have mentioned that Columbia University ranks first among Ivy League colleges in terms of the number of veterans enrolled. And while we saluted Columbia for this fact, this statistic fails to give Columbia the credit it deserves for its outstanding efforts at recruiting military veterans to the Ivy League college. A “New York Times” article yesterday by Michael Winerip does a nice job of highlighting Columbia’s outstanding efforts to make the Columbia education available to our citizens who serve our country. 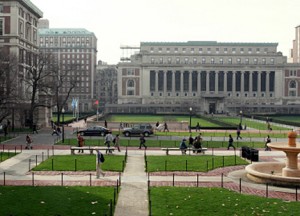 We salute Columbia University for their terrific efforts at recruiting our veterans.

The article focusing on Columbia University admission to veterans describes how a Dean of Admissions, Curtis Rodgers, doesn’t wait for veterans to come to campus. He goes to veterans by visiting military bases. How many prestigious universities do this? We’d be interested to know. Even more interesting is the description Mr. Rodgers offered of applicants to Columbia who are veterans, citing that they are often more understated and less aggressive. You read that right — marines are less aggressive than your average high school applicant!

According to the article in “The New York Times,” “Marines are understated. While 18-year-olds describe in detail a week they spent in Costa Rica building houses for the needy, Sergeant Watts, Cpl. Benjamin Vickery, Cpl. Tyler Fritz and Cpl. Andrew King barely mentioned their deployments to Iraq and Afghanistan. ‘No one wants to brag about something so terrible, Corporal King said. ‘In a brief 30 minutes you can’t explain something that dramatic in your life.'”

Yale alumnus Gary Trudeau wrote a terrific comic strip this past week in which he lamented on the lack of efforts of so many universities to recruit veterans. In the comic strip, Trudeau writes, “Athletes? Sure. Legacies? In spades. But veterans? Some of the country’s most talented, motivated kids? Not so much!” We second Trudeau’s complaint but salute Columbia University with their fantastic efforts at recruiting those men and women who serve our nation.

Check out the article on Columbia Admission for Veterans in “The New York Times” and let us know your thoughts on Columbia’s efforts by posting below!