Columbia in the Rose Bowl 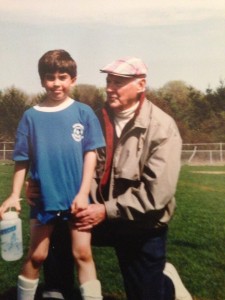 My son, Brian, with Cliff Montgomery circa 1990.

On this day, four-fifths of a century ago, a dear, late friend of mine engineered what is widely regarded to have gone down in history as one of the greatest athletic upsets of the twentieth century, eclipsed perhaps only by the Miracle on Ice. The day was January 1, 1934 and Cliff Montgomery was the star quarterback of the Columbia University football team. As the team’s leader, Montgomery had led the Columbia Lions, with a 7-1 record, to the summit of college football — to the promised land in the Sierra Madres of Pasadena, California. He had led them to the twentieth edition of the Rose Bowl. It would be the final game of his college career, a career that would go down as one of the best in college football history and earn him a spot in the College Football Hall of Fame. But it was all but assured that his final collegiate game would end in defeat.

Facing an 8-1-1 Stanford University squad that had been scored on only four times throughout the course of the entire season, Columbia was as heavy an underdog as there ever has been. Said Montgomery to “The New York Times” in a 1981 article, “When we arrived the day before the game [after traveling from New York by train], the Rose Bowl looked like a lake. The players’ benches were floating up and down the sideline like small boats.” Maybe it was fate that had intervened. Or maybe it was just the captain’s masterful play that led Montgomery to execute a trick play known as the “KF-79” at Stanford’s 17-yard line. Al Barabas snuck into the end zone when Montgomery faked a handoff to Ed Brominski and rolled with him. It was magic on that day, on that field, against that opponent.

Montgomery would be named the Rose Bowl MVP. He would have won the Heisman Trophy had the Heisman begun just a year before (he was asked to do the Heisman pose). He would go on to play professional football for the New York Dodgers (that team name is not a mistake). He would become a college football official who officiated more Army-Navy games than anyone in history. He would be a long-time executive at McGraw Hill. And, in service to his country during the Second World War, Cliff Montgomery proved that he had saved his best heroics for his fellow American soldiers. During the 1945 invasion of Okinawa, Cliff brought his flagship alongside a burning destroyer in rough seas. He is credited with saving the lives of 400 sailors on that sixth day in April, 1945, according to the then-Secretary of the Navy. For his intrepid gallantry, Cliff was awarded the nation’s second highest military honor — the Silver Star. And the note from the then-Secretary of the Navy makes reference to his continued quarterbacking heroics.

But more than a football and American hero, more than a real-life Forrest Gump as Cliff’s son dubbed him, Cliff Montgomery was a wonderful human being. He was my next-door neighbor for twenty years, rooting on the start of this business, until his death at the age of 94 in 2005. My son called him Mr. Cliff for all those years and he even wrote his Personal Statement for his college essay about him. Mr. Cliff and his wife, Nancy, would always bring my son ice cream Sundays on his birthday and he was one of the most modest people I’ve ever come across. Inside of Mr. Cliff’s garage were photos of him with nine — nine! — United States Presidents. Also inside his garage were holiday cards and letters from the men whose lives he saved as well as from their families, who, too, in many ways owed their lives to him.

In the final days of Cliff’s life, my son called the then-coach of the Columbia University football team. He reached a secretary in the football office and asked to speak with the head coach. He was told that the coach was in a meeting. My son then said that he was calling about Cliff Montgomery. That’s all he said. He didn’t say that Cliff was their star QB who led them to Rose Bowl victory. Within seconds, the head coach of the Columbia football team was on the line. The next day, the coach and his current QB had driven to Mineola, Long Island where they visited with Cliff and his wonderful wife, my friend Nancy, in his hospital room. Cliff wasn’t conscious at the time, but the coach and QB left a football signed by all of the Columbia players at the time. Cliff, the captain, was the last surviving member of that 1934 Rose Bowl winning team. On this 80th anniversary of his win and 100th anniversary of the Rose Bowl, we remember him. We miss him. And my son so happens to be there, with his Los Angeles Flag Football league — at the place where it all started — in Pasadena at this year’s Rose Bowl.