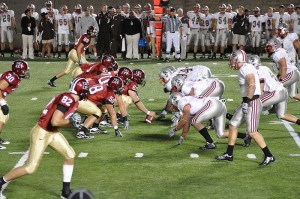 Football coaches have more clout than do track coaches in Ivy League admissions. It is what it is (photo credit: Chensiyuan).

College athletic coaches sometimes promise more than they can deliver. Each and every year, students and their parents come to us for the first time as clients and say something along these lines: “John was being recruited for his sport by the coach at such and such Ivy League school. He was told he’d be getting in because his scores and grades would likely earn him admission even without being recruited for athletics. John applied Early and was deferred. Why did this happen and can you help?” We’d like to tell the readers of our college admissions blog — the single most visited blog on the topic of college admissions — that this kind of scenario happens more often than you’d think. Just because a college coach says he’s recruiting your son doesn’t mean he’s actually going to go to bat for your son in admissions.

If, for example, the college coach thinks that he might be able to get away with not flagging you as one of his recruits because there’s — in his opinion — a good chance you’ll get in on your own, he just may roll the dice. College coaches very often roll the dice — no matter what they may have told you. College coaches, after all, are salesmen. They want your son to compete for their school and, in some cases, will tell you anything to get you to apply.

So just because a college coach says that your child is in, take this with a grain of salt…especially if your child isn’t being recruited for a major sport like basketball or football. The tennis coach virtually guaranteeing your child’s admission to an Ivy League school is a good thing and chances are it’ll all work out but know that the tennis coach isn’t exactly atop the athletic recruiting hierarchy in highly selective college admissions. A tennis coach not landing a recruit isn’t exactly going to break the incoming class for an Ivy League college. College athletic coaches are by no means omnipotent in the admissions process. Sometimes they’re not even particularly potent. Sorry to break this news to you!