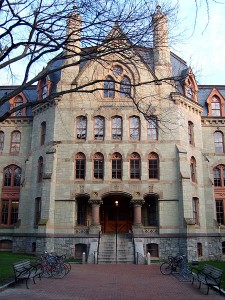 Penn seemingly always has a creative way of informing students that they’re likely to be admitted. And Dean of Admissions Eric Furda is always behind it.

College admissions likely letters come in all different shapes and sizes. The University of Pennsylvania had a very creative way of informing students this year that they would likely be admitted to their Class of 2016. They sent out a video, starring Dean of Admissions Eric Furda. If you’ll recall, Eric Furda sent out a video last year, too, to convey to a select set of applicants that they will likely be admitted. This year’s is just as much fun. Penn really goes all out on its likely letters!

In the video, Dean Furda unlocks an office that contains the list of students likely to be admitted. He then brings over the list (in a very stealthy way) to a group, presumably, of admissions officers who celebrate its release. In the video, Furda states to students that if they keep up their hard work and their grades, they will be admitted to the Class of 2016. College admissions likely letters are a way of trying to get applicants to make a commitment to a school. It’s often reserved for the best applicants in the pool.

This year’s likely letter video also features a host of current Penn students who recount what it was like to receive their likely letters (and by letters, we now mean videos). The video then goes on to share with applicants the benefits of attending the University of Pennsylvania. It’s indeed a sales pitch and we salute the University of Pennsylvania for its typical creativity in college admissions.