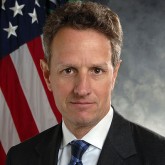 The former Secretary of the Treasury is a Dartmouth alumnus. Who had a hand in helping start his career?

There’s an interesting article in “The Dartmouth” today entitled “Athletes benefit from career resources, alum. networks” written by Laura Weiss that we wanted to bring to the attention of our readers. In the piece, Weiss writes about how athletes — and, in particular, football players and men’s and women’s lacrosse players — often rely on former Big Green athletes to land jobs (especially in finance and consulting). As head Dartmouth football coach Buddy Teevens puts it, a strong academic and athletic record are qualities that employers seek in the job market.

Amy Patton, the head women’s lacrosse coach at Dartmouth, keeps strong ties to her former players, many of whom now work on Wall Street. The team has a mentorship program in place so that former Big Green laxers can help current Big Green laxers land employment opportunities. For the men’s lacrosse team, according to “The Dartmouth,” “The Dartmouth men’s lacrosse team benefits from a similar connection with Morgan Stanley, where the team has ‘a pretty significant pipeline,’ co-captain Eric Clemmenson ’14 said. During his years on the team, Clemmenson said a member has interned at Morgan Stanley every summer. The team’s relationship with the company stems from strong ties between the College and its employees, but Morgan Stanley employees who are former members of the lacrosse team play a role as well, Clemmenson said.”

What do you think about the Wall Street ties between former Ivy League athletes and current Ivy League athletes? Is it interesting to you that many of these ties are on the football and lacrosse teams? Let us know your thoughts on the subject matter by posting a Comment below. We look forward to hearing from you.