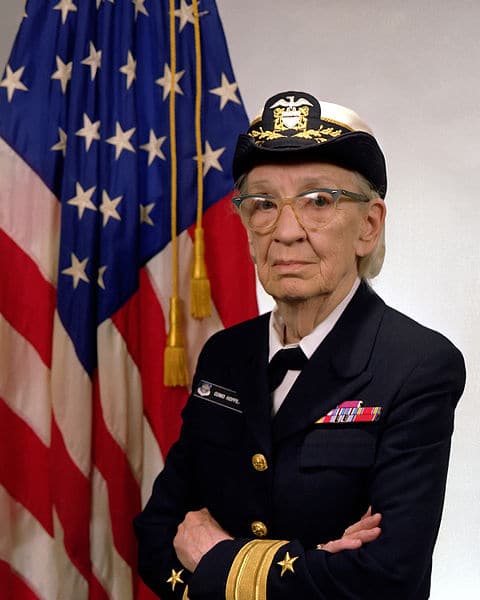 Rear Admiral Grace Hopper was a great American patriot and a pioneer in the field of computer science.

Calhoun College at Yale University, named after John C. Calhoun, the seventh vice president in American history, will be renamed after Rear Admiral Grace Hopper, it was announced today. Calhoun was an ardent supporter of slavery and so many in the Yale community, over the years but particularly over the last several months, have voiced their outrage that the university — which prides itself on diversity — would choose to honor a man whose legacy is inextricably linked to the inhuman practice.

As reports Gabriella Paiella for “New York Magazine” in a piece about Yale’s decision, “Back in April 2016, Yale president Peter Salovey said that they would not be renaming Calhoun College, which he explained by saying that ‘erasing Calhoun’s name from a much-beloved residential college risks masking this past, downplaying the lasting effects of slavery, and substituting a false and misleading narrative, albeit one that might allow us to feel complacent or, even, self-congratulatory.’ He’s since appeared to have come around to the arguments against the name. ‘John C. Calhoun’s principles, his legacy as an ardent supporter of slavery as a positive good, are at odds with this university,’ Salovey told reporters following news that the university would in fact be dropping Calhoun’s name.”

The late Rear Admiral Grace Hopper received her graduate degrees at Yale. And you bet the university is quite proud of this pioneer’s association with the university.

We applaud Yale’s president, Peter Salovey, for having the chutzpah to so publicly change his mind and stand in support of the members of the Yale community who viewed the school’s association with the name Calhoun to be antithetical to its mission. And we applaud the university for choosing to rename the college after Grace Hopper, a pioneering figure in the field of computer science. Rear Admiral Hopper not only invented the first compiler for a computer programming language but she made it known that machine-independent programming languages were the way of the future. She — a woman in the field of computer science and a woman in the United States armed forces — served her country when doing so wasn’t always easy and it certainly wasn’t popular. A posthumous recipient of the 2016 Medal of Freedom, Grace Hopper received her master’s degree and doctoral degree from Yale University. Interestingly, she attended Vassar College as an undergraduate — where she was initially denied admission but ultimately admitted the subsequent year. Good fix, Vassar!

Yale University should be quite proud of the legacy of the late Rear Admiral Hopper and, in our view, the school couldn’t have picked a better namesake for a college that will never again bear the name of a man who supported slavery. It will now bear the name of one of the great American patriots of the ages. And that’s pretty cool if you ask us.