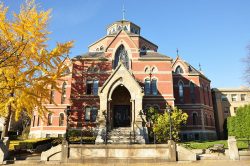 It was a banner year for the Brown University admissions office (photo credit: Chensiyuan).

In the Regular Decision round, 2,027 students were offered admission to Brown University to be members of the Brown Class of 2021. It was a banner year for the Providence, Rhode Island-based university with a Regular Decision admit rate of 6.5% and an overall admit rate of 8.3% (including Early Decision). This 8.3% admit rate surpasses the previous record of 8.5% set for the Brown Class of 2019. And how many students were placed on the Brown waitlist so those students have an idea of what they’re up against? About 1,000.

Congratulations to our students at Ivy Coach who earned admission to Brown University to be members of the Brown Class of 2021! And we hope you’re looking forward to A Day on College Hill next week. It’s a great chance to figure out if Brown is for you. We hope you love it.