What makes athletes from the Ivy League different from athletes from, say, the ACC, Big East, or SCC? Well, for one, Ivy League athletes don’t earn scholarships. They also have to meet certain admissions criteria (see our post on the Ivy League Academic Index) and they tend to be student-athletes more so than athletes who happen to also go to school. One great example of such an athlete is Andrew Goldstein, a graduate of Dartmouth College, where he played goalie on the lacrosse team and earned two honorable mention All-American nods. 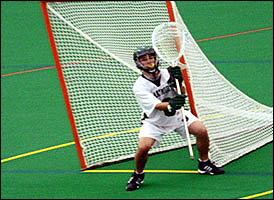 Ivy League athletes like Andrew Goldstein are true examples of student-athletes with an emphasis on the student.

Andrew Goldstein is regarded as the first male professional team sport athlete in North America to be openly gay during his playing career. Goldstein played for two seasons of Major League Lacrosse – first with the Boston Cannons and then with the Long Island Lizards. Goldstein was openly gay at Dartmouth as this SportsCenter piece points out, a piece we at Ivy Coach happened to have a whole lot to do with.

Since leaving lacrosse, Goldstein has become an outspoken advocate of not saying “gay” in a derogatory way in locker rooms. He’s also become a biology professor at UCLA and made a notable publication in the prestigious “Science” magazine by leading a team of researchers that found the possible cell of origin for prostate cancer. Wow.