A Salute to a Dartmouth President 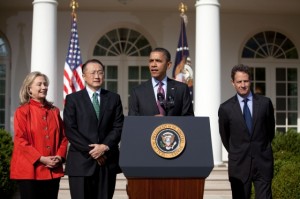 Former Dartmouth president Jim Yong Kim courageously and symbolically stood arm in arm today with the LGBT citizens of Uganda. Ivy Coach salutes him for his leadership. We predict that the woman to the left in this photo will nominate him to be the next Secretary of State in a couple of years.

Leaders of Ivy League colleges often implore students during convocation and commencement speeches to go out there and change the world, to do their part to make this world a better place for all. One former Ivy League president has always led by example and this has never been more clear than on this day. As you may know, the president of Uganda recently signed into law a bill that hands out life sentences for homosexual “violations.” Even those who choose not to report such violations are subject to harsh discipline. Well, former Dartmouth College president Jim Yong Kim, now the president of the World Bank, made a bold, unprecedented move today.

According to an article in “Retuers” on the former Dartmouth leader, “The World Bank on Thursday postponed a $90 million loan to Uganda’s health system over a law that toughened punishment for gays, an unusual move for an institution that typically avoids wading into politics…World Bank President Jim Yong Kim, however, sent an email to bank staff saying the bank opposes discrimination, and would protect the safety of all employees. He said passage of the Ugandan law was not an isolated incident, as 83 countries outlaw homosexuality and more than 100 discriminate against women. ‘In the coming months, we will have a broad discussion about discrimination with staff, management, and our Board on these issues,’ Kim said in the email obtained by Reuters. ‘Now is the right moment for this conversation.'”

Jim Yong Kim, you founded Partners In Health to bring modern medicine to those in the world most in need. And now, you have stood up to the criminal president of Uganda. While your organization, the World Bank, is typically apolitical, you could not stand idly by and watch such a bigot impose such draconian laws on the people of Uganda. You had to do something. And you did. Jim Yong Kim, we salute you. You have made the College on the Hill proud. And, well, we predict that you will be the next Secretary of State.