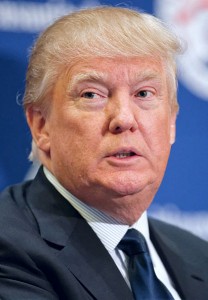 Donald Trump is a graduate of Wharton. And he’s certainly mentioned it quite a bit on the campaign trail (photo credit: Michael Vadon).

It’s been interesting to witness how leading Republican presidential contender Donald Trump has dropped that he attended Wharton many times throughout his campaign for the nomination. And while Mr. Trump is, arguably, Wharton’s most famous alum, it comes as no surprise that the school has stayed relatively silent about their former student’s bid for the White House. Wharton, of course, wants no association with some of the things that come out of the real estate mogul’s mouth.

As a “CNBC” piece by Daniel Libit on Wharton’s ties with Trump points out, “And so it is that Wharton, the University of Pennsylvania’s renowned business school, has been sucked up into the quixotic cyclone of Trump’s campaign, which has brought it an unprecedented amount of publicity from a most unusual (and unofficial) representative. Surely, Trump’s swaggering style diverges from Penn’s historically more stolid way of self-promotion: Its mascot, after all, is a Quaker.” We’d sure agree. Indeed an informal survey conducted by “CNBC” of Wharton professors indicated that the group was largely split about whether or not Wharton’s exposure through Trump’s candidacy, well, trumps any association with some of his not-politically correct rhetoric.

Do you think Donald Trump’s candidacy is good or bad for Wharton? We’re curious to hear from our readers with their thoughts on the matter. We’re of the opinion that most administrators at Wharton secretly love it when their brand name is regularly dropped on every major news channel during this election cycle. A few administrators might cringe, but we suspect most like the attention. In fact, we’re quite sure of it.