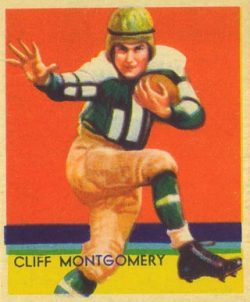 Our dear, late friend Cliff Montgomery, the hero QB of Columbia’s 1934 Rose Bowl victory, would be mighty happy to see Columbia back on top of the Ivy League football standings.

While the term ‘Ivy League’ existed prior to 1954, including as early as 1933, it became the official name of the athletic conference that includes Harvard University, Yale University, Princeton University, Dartmouth College, Brown University, Columbia University, University of Pennsylvania, and Cornell University in 1954. In short, the Ivy League was formed as a football conference. And so we have a history of tracking Ivy League football on the pages of our college admissions blog since this league is part of the DNA of each of the Ancient Eight institutions.

In the over 60 years since the formation of the Ivy League, the football programs that tend to pop up again and again as champions are Dartmouth, Penn, Harvard, Princeton, and Yale. It’s Dartmouth College and the University of Pennsylvania that have won more Ivy League football titles than any other Ivy League school in history, though Harvard University is right behind them. On the other end of the spectrum, Cornell University has only won three titles. Brown University has won four. And Columbia University has won a grand total of one Ivy League title — in 1961 when both Columbia and Harvard went 6-1. But regular readers of Ivy Coach’s college admissions blog know that Columbia enjoyed one of the greatest seasons in the history of college football in 1934, before the official formation of the Ivy League — led by Cliff Montgomery. Montgomery, who would later become one of the great heroes of the Second World War, led the Columbia Lions to one of the great upsets in college football history when his team defeated Stanford 7-0 in the Rose Bowl that year.

It sure does seem as though the Ivy League football standings of just a few years ago are largely upside down now. The teams that were in the top in recent years now sit at the bottom of the standings and vice versa — and it’s nice to see that this is possible. Congratulations to the Columbia University football program, under the leadership of Coach Al Bagnoli (who led the University of Pennsylvania to many a title in a past life), for this remarkable turnaround. Our eyes are glued over these next four games to see if Columbia can pull off their first Ivy League title since 1961. Hey, stranger things have happened — like in 1934!