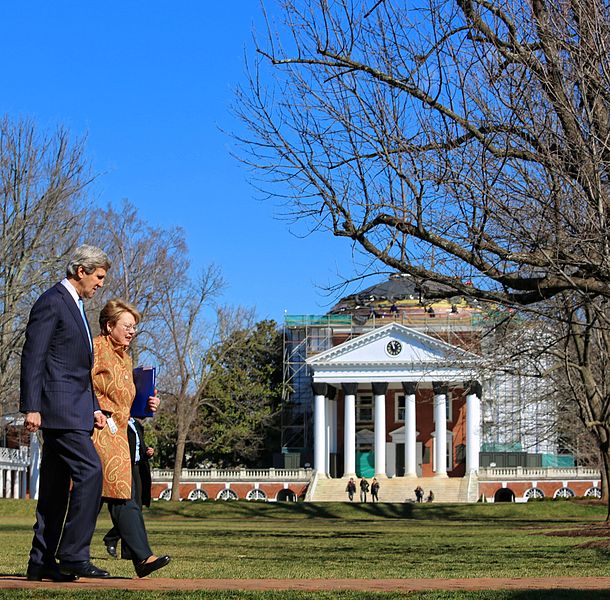 Oh hi there, Secretary Kerry on a visit to the University of Virginia.

There’s a terrific piece up on “Forbes” by Carter Coudriet entitled “Should U.S. Public Colleges Accept More International Students, Or Not?” As Mr. Coudriet points out, “In the 2014-2015 school year, America hosted 974,926 international students in its various colleges and universities, both at the undergraduate and graduate level. This number has climbed every year since 2006 and comprises 4.8% of students in America, up from 3.3% a decade ago.” So is international students coming to America to receive undergraduate and graduate educations a trend? You bet it is.

State universities benefit in many ways, including financially, from having international students on their campuses.

As Mr. Coudriet writes, “With the pressure to serve more students (and to raise their ranking in various lists), public colleges have needed to rely on tuition as a greater source of revenue. According to the College Board, in-state tuition for two-year and four-year public colleges is the highest it has ever been, both in real dollars and in 2015-adjusted dollars. Raising in-state tuition at the current rate, however, is not nearly enough, and the political ramifications for hiking public school students’ tuition is unattractive.” He’s right. Raising tuition is an unattractive alternative — especially if such can be avoided by simply offering spots to some international students. A simple, logical solution indeed!

The drawback of course is that fewer in-state students end up getting in when international students are taking up slots, although certain public universities have tried to address this conundrum in recent years after facing intense criticism (hi, University of California). But we firmly believe that public universities are better off — both financially and otherwise — for having international students on their campuses. These, after all, are global institutions and they should be educating the world’s citizens — not just the state’s.