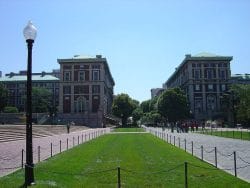 An increasing percentage of students at highly selective American universities hail from nations outside of the United States.

We came across an editorial on a very conservative-leaning website, “Accuracy in Media,” that we figured we’d share on the pages of our college admissions blog. After all, we like to present two sides to issues and we believe that every highly selective college should seek to present both perspectives in their classrooms — and, yes, they could no doubt do a better job of presenting the conservative perspective. The piece, by Cliff Kincaid, is entitled “How About ‘America First’ for College Admissions?” and we’ve got a thing or two to say about it.

As Kincaid writes, “American high school students are losing slots to foreigners.” It’s not untrue. International students make up an increasing percentage of incoming classes at highly selective American universities. He also writes, “The foreign students are paying the full cost.” That’s also, in most cases, generally the case. International students tend (not in every case, but in most cases) to pay the full cost of tuition. And that is, in large part, because these schools need to offset the cost of the American students who need financial aid to be able to attend college. So an argument noticeably missing from Kincaid’s piece is that international students are making it possible for many American students to attend our nation’s most selective universities — likely because such a point wouldn’t serve his argument.

Oh, and we left out a number of ridiculous statements Kincaid made in his editorial — mostly because they were ridiculous. For instance, he writes, “The foreign students are paying the full cost, since money is no problem for the regimes that sponsor them.” The regimes that sponsor international students? What on earth is he talking about? By regimes, does he mean their parents? The man makes multiple references to regimes in the course of his piece, only undercutting the few valid points he raises. He also writes, “Their financial contributions do not reduce tuition for the American students lucky enough to get in.” But we beg to differ. If these American institutions didn’t have full-pay international students on their campuses, they’d — quite logically — have more American students, including more who need financial aid. So, by this very clear logic, without international students, colleges would have to raise tuition costs. International students thus do reduce potential tuition costs.

We believe that highly selective American universities can do a better job of fostering environments that support students and faculty members on both sides of the political spectrum (a.k.a., they can do a better job of welcoming conservative viewpoints). But we also believe that conservative arguments against the influx of international students to American universities should be grounded in fact rather than fiction and a love for people of all backgrounds and not xenophobia.

Have a question on international students and tuition? We’re curious to hear from you so post a Comment below and we’ll be sure to jump in on the conversation.