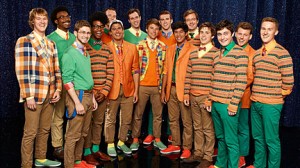 The Dartmouth Aires a cappella group will be appearing on NBC's "The Sing-Off" this fall.

If you don’t happen to know what an a cappella group is, it’s basically a group of people who sing with no instrumental accompaniment (and typically dress ridiculously). Often, a group will have a solo performer backed up by the entire group of twelve or so in chorus. And if you’re a first-year student at an Ivy League school, chances are your first week of college will be filled with more a cappella performances than you’ve ever seen in your life.

One particular Ivy League a cappella group will be gaining some national publicity this fall when the Dartmouth Aires compete on NBC’s “The Sing-Off.”  The Aires are one of Dartmouth’s most respected a cappella groups but we’ll see how they do on the national stage. Although the show hasn’t aired yet this season, we suspect they’re going to make a very nice run!