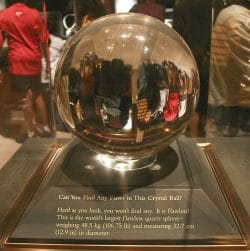 We have a crystal ball at Ivy Coach. It’s famous!

Many folks often say to us, “Why not see if my son can get into Columbia in the Early Decision round? What’s the harm? We don’t want to wonder for the rest of our lives if he could have gotten in.” It’s indeed a refrain we hear annually at this time, although it’s not always Columbia as the first choice school of course. Sometimes it’s Harvard in the Early Action round or Brown Early Decision. And the parent does raise a valid point about having to wonder for the rest of their lives if the son could have ever gotten in. But we have a remedy.

At Ivy Coach, we have a crystal ball. It’s a crystal ball that’s rather ubiquitous. It’s been referenced on the pages of “The Dartmouth,” America’s oldest college newspaper. Our crystal ball is very accurate. It can tell a student and his or her parent if a student has a reasonable shot of getting into a school like Columbia in the Early Decision round. At Ivy Coach, we believe in encouraging students to apply to reach schools in the Early round. Why not? You want to take some risk. But we don’t believe in impossible dreams and if a student has no shot of getting into Columbia in the Early Decision round, we’ll tell them, courtesy of our crystal ball. This way, they’ll never have to wonder.

But we’d like to point out to our readers that there is one other flaw in this line of questioning. When the parent asks, “What’s the harm,” there actually is a harm. Because a student only has one Early Decision card. They can only commit to one school. Even in Single Choice Early Action at a school like Harvard, Yale, Princeton, or Stanford, the student can’t apply to other private schools Early. So what’s the harm? The harm is the student can’t use the Early card more wisely at a reach school, but not an impossible reach. The odds of getting in during the Early round are much stronger than in the Regular round so not to use the Early card wisely is to waste it. And who wants to wonder for the rest of their lives if they wasted their Early card. You see what we did there?