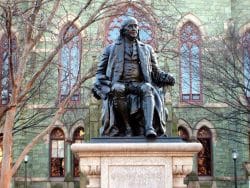 There was a change to the language of the Early Decision commitment at the University of Pennsylvania this year.

Hat tip to one of our readers for alerting us to this policy change.

Originally Published: We write about highly selective college admissions every day of the week on the pages of our college admissions blog but every now and then we realize we forgot to write about a certain topic. While we were aware that the University of Pennsylvania changed the language of its Early Decision policy for this admissions cycle, we never offered our opinions about the policy change. What were we thinking? Sincerest apologies to our avid readers. We’ll make it up to you, we will.

Students who commit to a school’s binding Early Decision policy should want to go to that school above all others. So we absolutely empathize with the University of Pennsylvania’s decision to make the language of this binding commitment even more restrictive.

The change in language, orchestrated by the always candid and outspoken Dean of Admissions Eric Furda, was made because Furda and his staff wanted only students ready to make that binding commitment to the university to apply ED. Each year, there are always students who try to back out of their Early Decision commitment (yikes is right!) and who wants that? Nobody. At Ivy Coach, we want to work with students who love us. And the University of Pennsylvania is no different. They want students who love them too. It’s rather simple if you think about it. So when a private college counselor in the piece says, “This new policy is disappointing and it’s going to hurt kids,” she couldn’t be more wrong. How is this going to ‘hurt kids’? To hold them to the binding commitments that they make? To honor their promises? Seems like an important life skill to us…