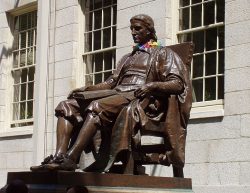 The Harvard University Early Action results are out for the Class of 2021 (photo credit: Jessica Williams).

The Early Action results are out for the Harvard University Class of 2021. From an Early Action pool of 6,473 applicants, 938 have earned admission. Congratulations to our Ivy Coach students who are among the 938! And we think we’ve since heard from the remaining 5,535. We’re kidding. Or are we? The 6,473 applicants to Harvard marks a 5% increase in applicants from last year, for the Class of 2020. So there was indeed a spike in 2016. And spikes in applications invariably go hand-in-hand with lower admission rates. Sure enough, Harvard’s Early Action admission rate for the Class of 2021 — 14.5% — marked the lowest admission rate since Harvard reinstated its Early Action policy way back in 2011. Yes, we’ve been blogging about highly selective college admissions every day for quite a long time, as you can tell. It’s like brushing our teeth. It needs to be done daily, preferably twice but only once if you’ve got better things to do. Ok, you should brush and floss every day twice — we’re only kidding. It is highly encouraged, say our dentists.

Anyhow, back to the Harvard  University Class of 2021. As Brittany N. Ellis reports for “The Harvard Crimson,” “The increase in early applicants follows a trend that has occurred each year since the nonbinding early action program returned, according to the Dean of Admissions and Financial Aid William R. Fitzsimmons ’67. Reflecting on the trend in an interview Tuesday, Fitzsimmons said admissions officers ‘also worry that too much of an emphasis on early admission’ may pressure students into making hasty college decisions.”

And what’s the breakdown of the admits to the Class of 2021 at Harvard by ethnicity, geography, first generation status, etc.? As reports Ellis for “The Harvard Crimson,” “The geographic distribution of students has remained primarily constant, as well, with a slight increase in students from the Midwest and a smaller percentage from southern and western states compared to last year. The percentage of first-generation students admitted early is slightly higher than last year, representing 8.7 percent of the admitted class compared to 8.2 percent from the Class of 2020.” And no surprise here — very few applicants (a mere 39 in total — 39!) applied to Harvard through the Coalition’s application — which we correctly forecasted months ago so many times in so many ways on the pages of our college admissions blog. Our famous crystal ball, one cited on the pages of “The Dartmouth,” America’s oldest college newspaper, strikes again! [Mic drop].

Congratulations to admitted students to the Harvard University Class of 2021!