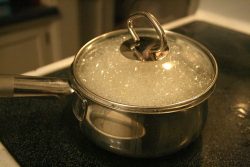 You know what they say about watched pots (photo credit: Ildar Sagdejev).

If you’re a high school senior or the parent of a high school senior, you’re likely getting anxious as the days tick down until the announced Class of 2022 Early Decision and Early Action notification dates. We’ve aggregated the notification dates for many of America’s most highly selective colleges below. Sometimes the schools are extremely specific about when they’ll be releasing their decisions and sometimes they’re vague (we’re looking at those schools that only specify they’ll be releasing decisions in mid-December — gee thanks!). Hopefully, for high school seniors who applied Early Decision or Early Action as well as their parents, knowing when the decisions will be released can alleviate at least a little bit of stress during these anxious days.

Not Applying Early Decision or Early Action Is Crazy

If it’ll help calm those nerves, check out our compiled admissions statistics for the Early Decision or Early Action rounds at Ivy League schools for previous classes. If, say, you applied Early Decision to the University of Pennsylvania this year, it just might make you feel better to know that 22% of applicants earned admission to the Class of 2021 in the Early Decision round — as compared to 6.8% in the Regular Decision round. Students who choose not to apply Early Decision or Early Action to a given school or schools make one of the biggest mistakes in the college admissions process. So know that by applying Early, you made a wise choice. And if you don’t get in (as in you get denied admission), you’ll be in the same boat as the folks who didn’t apply Early. So what pray tell is the advantage of not applying Early? Even if you get deferred, you’re generally in a better spot than a Regular Decision applicant. As a rule of thumb, about 10% of students who are deferred at highly selective colleges end up getting in. Remember that Regular Decision admission statistic at the University of Pennsylvania? It was 6.8%. You do the math.