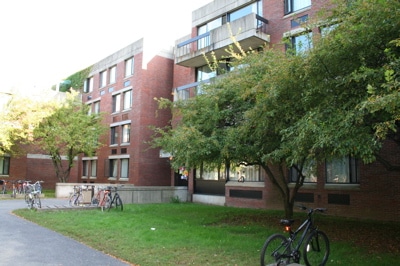 Hampshire College should never have allowed the American flag above their campus to be lowered.

Hampshire College, a small liberal arts college in Amherst, Massachusetts, lowered the American flag on the eve of the presidential election. As the school writes on its website, on November 9th, “A group of Hampshire students lowered the campus flag in the evening, the day after the election, their reaction to the toxic tone of the months-long election and the escalating number of news reports from across the country over recent months and years of hate speech, harassment, and violence against people of color, immigrants, international citizens, and Muslims.” And on November 10th, “The College allowed the flag to remain at half-staff to honor the students’ expression and to facilitate a campus dialogue. Sometime overnight the campus flag was burned. The College does not know who burned the flag, whether it was burned by one or more students or others. The incident is still under investigation by campus police.”

As the timeline continues, on November 12th, “Hampshire’s Board of Trustees voted to fly flag at half-staff to facilitate a continued campus dialogue.” And on November 18th, “Six days later, President Jonathan Lash sent an email to campus communicating the College’s regret at having flown the flag at half-staff at this time and causing unintentional distress, especially to veterans.” Amen to that statement. While the majority of Americans did not vote for our president-elect (and regular readers of our blog know we haven’t been shy in criticizing him), he is our president-elect and the American flag should fly on American college campuses irrespective of the results of a presidential election. This is America. This is bigger than an election. Brave American veterans have given their lives in service to our nation and this sacrifice is represented by our flag. Shame on the students at Hampshire College who chose to lower our American flag and, more significantly, shame on the college administration for allowing the flag to remain at half staff while listening to their grievances.

While we respect that the Hampshire College administration ultimately arrived at the right decision when they chose to raise the American flag above their campus again, it shouldn’t have taken a group of American veterans to sway them to reason. The American flag should proudly fly over every single American college campus — public or private. End of story. But we have a feeling we’re about to receive some Comments below. Bring it.