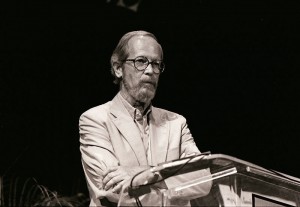 Elmore Leonard has some tips for you as you write your college admissions essays (photo credit: MDCarchives).

And so today we thought we’d share with you some tips from one of the great writers of our time, a man who died yesterday but whose work lives on in bookstores, on the silver screen, and on your television set: Elmore Leonard. In an editorial from 2001 in “The New York Times” entitled “Writers on Writing; Easy on the Adverbs, Exclamation Points and Especially Hooptedoodle,” Elmore Leonard lays out his rules for writing well. We think that college applicants who are writing their college admissions essays as we speak should pay careful attention to his wise words. If you have a chance, read his editorial. If not, we’ll sum it up for you since we know high schoolers love their Cliff’s Notes.

Don’t open any story by writing about the weather. Who cares. Tell your story. If you’re going to write about the weather, it should be about your character’s reaction to this weather. Avoid prologues. Don’t use verbs other than said in dialogue. It distracts the reader and draws attention to the writer. The writer should be invisible. In good writing, it’s all about the characters and the writer isn’t thought about. Avoid too many exclamation points, avoid regional dialogue, don’t write detailed descriptions of characters (leave some of this open to the imagination), and leave out parts altogether than readers tend to skip. Makes good sense, no?

May you follow the advice of the legendary Elmore Leonard as you write your college admissions essays! And then when you’re done, you can sit back and watch an episode of FX’s “Justified” — a TV series based on his short story “Fire In The Hole.”