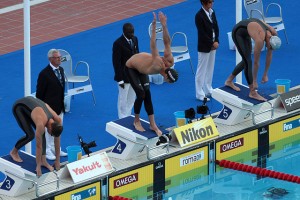 Writing about what you think about while swimming and staring at the black line on the bottom of the pool can be a good idea for a college essay (photo credit: Michiel Jelijs).

Since it’s the season for writing college essays, we thought we’d walk you through some common mistakes in college essays. In fact, we’re going to show you some sample sentences and then explain exactly what’s wrong. Even if the essay reads well and is enjoyable, these kinds of mistakes can mean the difference between being admitted and being denied. And these are just a few!

Sample: “My mother convinced me to get involved in science research and it turned out to be a good decision on her part. I’ve since fallen in love with centrifuges, pipettes, and mice.”

Sample: “Working for Senator Gillibrand has been an amazing experience. I started off at the bottom of the ladder, getting coffee and running errands. I didn’t really enjoy it much. But after several days, I got to really be a part of the political decision-making.”

Why It’s A Mistake: There are a few mistakes in this one: (1) Don’t put down starting at the bottom. That’s often how you work your way up in this life. It comes across like the student thinks they’re too good to get coffee and run errands; (2) The student may frustrate admissions counselors by writing how she moved up the totem pole after “several days.” Really?! Several days? Boo hoo that she had to get coffee for a whole week; and (3) It’s implausible that a high school student would have a real say in policy decisions in the U.S. Senate. Don’t overstate your role.

Sample: “Winning the 400 meter individual medley at state championships was the culmination of all of my hard work and dedication.”

Why It’s A Mistake: This is trite. The student worked hard and then won. Think about how many college essays focus on this theme. College admissions counselors are not inspired by students who work hard to win a race. It’s ordinary. Sometimes, sports is the only topic that a student has to write about in an activity essay. If that’s the case (and that’s not good), try to at least spin it in your own way. For instance, if you’re a swimmer, write about what it’s like to stare at a black line on the bottom of the pool for just about every minute of every practice. Write about what you think about during mundane laps.

We’ll be focusing on other mistakes in college essays in coming blog posts. While you’re here, check out College Essay Mistakes and College Admissions Essay Tips.