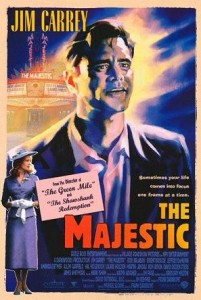 Jim Carrey’s caracter in “The Majestic” exercised his right to free speech. And so too will we. We will speak out against the IECA.

We’ve received a few phone calls over the last couple of days from folks in the college admissions community. Some folks who are dues-paying members of the “Independent Educational Consultants Association” (IECA) were upset that we’ve criticized an organization they pay good money to be in. But we’ve received even more phone calls from folks in the college admissions community to say thank you. They thanked us for using the platform of our widely read college admissions blog, a blog that has earned its reputation for telling it like it is about college admissions, to exercise our Constitutional right to express our thoughts on the organization, thoughts they voiced agreement with. One person even asked if we would consider starting an organization to compete with IECA. Allow us to answer that. Absolutely not. It is our belief that there are not enough good private college counselors in the world to have an organization that is exclusively for private college counselors and it’s one of the core reasons we believe membership in the organization isn’t worth the paper it’s written on. There are not hundreds of good private college counselors in the world and yet IECA has hundreds of members. There are not one hundred good private college counselors, much less hundreds. There are a few good ones. And of these few, they’re certainly not all members of IECA. But anyhow, we were about wrapping up our blog series on the IECA since we didn’t have the urge to give them any more free publicity, but allow us to continue. More thoughts came to mind and we’ve been told by some of our loyal readers that it all makes for quite good reading.

One of the additional gripes that the IECA has with us (if you’re not familiar with their other gripes, you can read about them here and also here) is that we were openly critical of a private college counselor, Steven Ma, who was featured in “Business Insider.” Apparently, we are not supposed to be critical of members of IECA. Well, first and foremost, we’re not currently a member of IECA (thank G-d). And we don’t believe Steven Ma is or has ever been a member of IECA. But if he is, then it speaks volumes about their organization. Because Steven Ma is not a private college counselor whom you want to be in an organization with. Our Founder, Bev Taylor and the company she began decades ago, Ivy Coach, is one of — and we’d argue the — most prominent brand in private college counseling. Bev was a high school guidance counselor on Long Island for years, helping students gain admission to their dream colleges. She’s presented workshops on college admissions for the Johns Hopkins Center for Talented Youth, for the National Association for College Admission Counseling, for Columbia University, College Week Live, the Ministry of Education in Beijing and Dubai, and so many more. Over the years, she has trained our staff at Ivy Coach, a staff that includes and has included many former Ivy League admissions officers, and we have all benefited from her immense expertise. Steven Ma? He was a hedge fund manager, which, to us, doesn’t equate with helping students gain admission to the colleges of their dreams. So, yes, we sure will raise our voice to encourage students to read about the private college counseling companies they are considering working with.