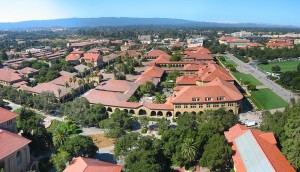 Stanford should show that they’re proud of Jason Collins. Retire his number. Write about him on your homepage and on your athletic site. Seriously (photo credit: Jawed Karim).

Hey, Stanford Athletics — it’s ok to run a story on the Stanford Athletics homepage (or heck, even the Stanford University homepage) on Jason Collins. It’s very nice that the student newspaper ran a story on someone who should be one of your favorite sons, but the university administration should be singing his praises too. The President of the United States took the time to do so. So too did a former President of the United States, the First Lady, Oprah, Martina Navratilova, and so many more. What would it take to land a story on your homepage? On the Stanford Athletics homepage, it’s nice that you have a Q&A with a men’s volleyball senior, an NFL free agency recap on former Stanford players, and an update on the tennis team but seriously? Nothing on the LGBT community’s Jackie Robinson?

Wouldn’t Stanford be proud to have Jackie Robinson among its alumni? You’d think. And now they do have a figure who broke down an important barrier for the gay community in the macho world of sports. But they don’t seem to be too proud of him based on their online marketing. Beyond online marketing, we are calling on Stanford to retire Jason Collins’ jersey number on the moment that he laces up his shoe-laces and takes the court as the first openly gay male athlete in one of the four big league sports. This shouldn’t even be a question. Collins’ remarkable play for Stanford University, his solid and long NBA career, coupled with his strength of character, courage, and conviction make him an obvious candidate to have his jersey retired. No player should be wearing his number. Not now. Not ever again.

Stanford, retire Jason Collins’ number. Write a story about him on your homepage and on your athletic page. It’s not asking too much. Get with the program. You’re supposed to be a university that is extremely supportive of its LGBT students and alumni. Show that support by championing a hero from The Farm.