A Salute to Mizzou 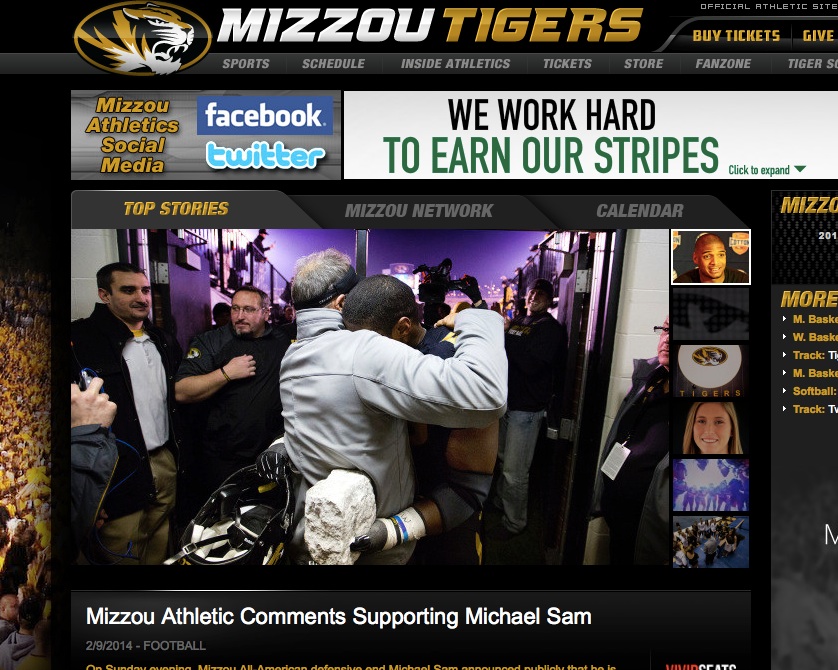 When NBA player Jason Collins came out as gay, we were critical of Stanford University. While many hailed Jason’s courage — including some folks at Stanford publicly — the university failed to highlight the historic significance of his coming out on their homepage or on the Stanford Athletics page. Nobody but us seemed to notice this but it bothered us (not even our friends at “Outsports” paid any attention to it). When Stanford should have been highlighting how proud they were of this former Stanford basketball star who represents their university so well and so proudly, they instead ran everyday stories that paled in comparison to the significance of Jason raising his hand for gay athletes everywhere. Today, on this day in which Michael Sam, the Consensus All-American, First-Team SEC, and SEC Defensive Player of the Year, announced to the world that he is gay, the University of Missouri did right by him and by every LGBT athlete competing across the world. 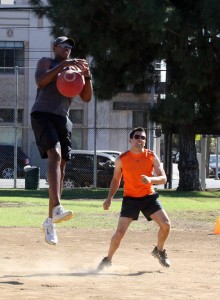 Bev’s son, Brian, playing kickball with Jason Collins, the NBA player who came out over the summer but has yet to sign with an NBA team since. We’re rooting for him. Jason, of course, is wearing a Stanford hat.

The University of Missouri had Michael’s back. Take a look at a screen grab of the University of Missouri’s athletic homepage tonight. Read through the comments of Michael’s coach and teammates. Jason may have been years removed from competing for Stanford at the time that he came out, but few have worn the Cardinal jersey with such dignity as the Collins brothers. They owed him a congratulations on their homepage. What’s even more remarkable is that Michael Sam came out prior to his senior year of college football and many knew that he was gay throughout his collegiate career. Not only did nobody say anything to the media — even though Michael didn’t ask them to keep this secret — but it was a non-issue for the team. Michael, after all, was one of the finest players to ever wear a University of Missouri uniform.

To the University of Missouri administration, to the athletic director, and, mostly, to Michael’s coaches and teammates on the football team, you’ve got a lot to be very proud of tonight. Michael Sam is not a player at the end of his career. He is not a player who may never make an NFL roster. He’s not going to be a player in a pro sports league that nobody watches or nobody’s heard of. Michael Sam is going to be a major contributor in the National Football League and he changes the national conversation about gays in sports. Michael Sam is going to be openly gay from the very beginning of his professional career. Congratulations to Michael and the University of Missouri for tackling this news story with the utmost of class.

What do you think about Michael Sam’s coming out? And what do you think of his team keeping this secret for so long? In the age of social media, it’s kind of incredible, right?