A Salute to Harvard Swimming 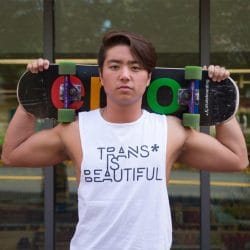 While we’re more about Dartmouth Swimming here at Ivy Coach being as Brian of our firm played water polo and swam for the Big Green, we must tip our swim caps to the Harvard Men’s Swimming & Diving Team. Some months ago, “60 Minutes” profiled Schuyler Bailar (check out the segment there), a young man who was born female but transitioned to being a man upon entering college. Schuyler was a heavily coveted recruit in women’s swimming and it was a coup for the Harvard Women’s Swimming & Diving Team to land her. While initially Schuyler had planned to be a male in her everyday college life but a female when she swam, he soon realized this just wouldn’t be healthy for him, as much as he loved being so successful at the sport of swimming.

Ivy Coach salutes the swimmers of Harvard University for not only embracing a transgender athlete but for essentially thinking nothing of it.

And so his Harvard coach, Stephanie Morawski, had a conversation with the men’s team coach, Kevin Tyrrell, about the possibility of Schuyler swimming on the men’s team. His times in the breaststroke events were very fast on the women’s team. He was a threat for first place in every Ivy League meet in the breaststroke events — but on the men’s side, his times weren’t nearly as special. But Harvard’s coach and male swimmers embraced the idea of Schuyler swimming on their team. Said Tyrrell, as reported by “60 Minutes,” “They didn’t see it as a big deal. I had worked up all of these questions in my mind to ask them, and I asked them, and they were like — ‘That sounds fine.'”

“That sounds fine.” We love that. Ivy Coach salutes the Harvard Men’s Swimming & Diving Team for embracing the courageous Schuyler Bailar, a young man who heeds the creed of Dartmouth alumnus Dr. Seuss: “Be who you are and say what you feel, because those who mind don’t matter and those who matter don’t mind.” And those who mattered in this case certainly didn’t mind.

Just as the Dartmouth Men’s Lacrosse team didn’t mind back in 2003 when Brian’s boyfriend throughout college and for some years after, All-American goaltender Andrew Goldstein, came out to the team and later became the first openly gay professional male team sport athlete in North America.

How Swimmers Should Navigate Ivy League Admission
Applicant to Harvard