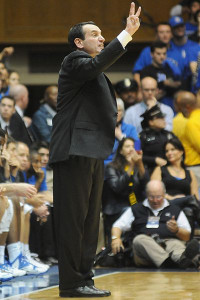 You can trust Coach K. But don’t trust too many other college coaches (photo credit: Adam Glantzman).

Rarely trust college coaches. Read that again and say it to yourself: Rarely trust college coaches. Every year, students and parents come to us and tell us something along these lines: “The hockey coach told us that our son is getting in if he applies Early Decision. He has a slot.” Ok, great…then why again are you coming to us? No, really. Why are you calling us? To brag? Because you think we have no better way to spend our time than to hear you boast about your child’s accomplishments on the ice? Did he really score a hat trick? That’s so cool! Please.

When parents tell us that coaches have guaranteed them that their children will gain admission, we often roll our eyes. Coaches — most often — cannot guarantee admissions. Now can Coach K tell a young man’s parents that his son is getting into Duke if he applies? You bet. But most coaches don’t have the authority of Coach K. The squash coach, the tennis coach, and even the hockey coach at so many prestigious universities across America often over-promise and under-deliver. They say they’re going to go to bat for your kid only to end up supporting another kid at the last minute. Maybe they think your kid’s grades and scores are strong enough to get in on his own merits. And that’s never a good thing because then your son’s application isn’t flagged as an athletic recruit. What if the rest of his extracurriculars aren’t special? If such is the case, there’s a good shot he’ll be deferred or denied admission, no matter what the coach promised. A coach can only go to bat for so many applicants each admissions cycle.

In short, if a coach believes in your son, if he’s going to go to bat for your son, have him put this in writing. Short of putting it in writing, it doesn’t mean as much as you might think it does. Coaches have a habit of not always doing as they say they will. Maybe a better recruit comes along at the last minute. Maybe the coach just doesn’t think your son is a very fast skater. Don’t put yourself in this position. Take a coach’s words with a grain of salt. On second thought, take it with two big grains of salt.