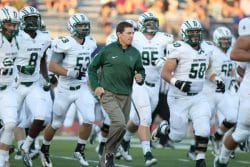 Did you know that the Ivy League started as a football league? Well if you didn’t, you do now. Anyhow, we’ve offered our praise over the last couple of years to the head coach of Dartmouth College’s football team, Buddy Teevens. But you know what? We’re going to do it again. Because this football coach is changing the game of football. He is not only winning, leading the Big Green to the school’s first Ivy League championship in quite a while (which allowed the school to maintain its position as the winningest football program in Ivy League history), but he is revolutionizing the sport and making it safer for all. If Billy Beane changed the game of baseball with Moneyball, then Buddy Teevens is changing the game of football with the Mobile Virtual Player (MVP), robots that serve as tackling dummies so players don’t have to make unnecessary and potentially dangerous tackles in practices.

It is the goal of Buddy Teevens that football players not only at Dartmouth but across the Ivy League, across college and professional football stop tackling one another in practices. As he has argued for years, it’s just not necessary — especially with the invention of the MVP by Dartmouth engineering students, completed under the guidance and encouragement of Coach Teevens. There is a real concussion problem in football. If you’re not already familiar with this issue, watch the Will Smith movie. But instead of just accepting that there is a problem in football, Buddy Teevens has led a revolution in the sport. He has worked toward a solution.

The story of Dartmouth’s pioneering head football coach is the kind of story feature films are based on.

And the fact is that Buddy Teevens is doing all this while he is winning. And his players are gaining the interest of NFL scouts (as reported by “The Dartmouth,” “This is a scene that has become a regular occurrence in recent weeks here at Dartmouth, with a grand total of eight players having opportunities to compete with professional franchises. Cornerback Vernon Harris ’16 signed with the Kansas City Chiefs while a group of players earned tryouts from several NFL teams — defensive back Troy Donahue ’15 with the Denver Broncos, receiver Ryan McManus ’15 with the New England Patriots, defensive end Cody Fulleton ’16 with the Seattle Seahawks, defensive lineman AJ Zuttah ’16 with the Tennessee Titans and Atlanta Falcons and finally, quarterback Dalyn Williams ’16 will work out for the Pittsburgh Steelers, Chicago Bears and Cincinnati Bengals. Additionally, speedy cornerback Chai Reece ’15 survived the first round of cuts at the Canadian Football League Free Agent Camp.”). It’s truly incredible.

Buddy Teevens has made the Ivy League proud. He is spearheading a revolution in the sport, one that decades from now will trace back to the Ancient Eight. He understands that his legacy will be about more than just winning. His legacy will be about changing the game, about making it safer for all. It’s all rather incredible. Oh, and if a parent should ever ask on a recruiting visit, “Will you keep my son safe,” nobody can give a better answer than Buddy Teevens. He’s trying to keep everyone’s son safe in the sport, not just the ones who play for him. Amazing indeed.