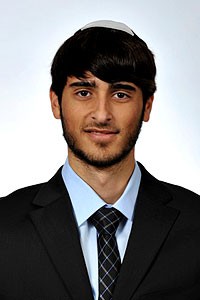 There’s a terrific article in “The New York Times” today about Aaron Liberman, a freshman at Northwestern University. Aaron, at 6’10, as you may guess, is a Northwestern University basketball player. He’s currently redshirting his freshman year due to shinsplints, but we wanted to bring his story to your attention as it’s a really cool one. Liberman is an Orthodox Jewish student. He is believed to be the third Orthodox Jew to play for a Division I team. According to “The New York Times” article by Ben Strauss, “Tamir Goodman is widely recognized as the first Orthodox Jew to play Division I basketball. He received a scholarship to Maryland, but chose to play at Towson because the university tailored its schedule to his decision not to play on the Sabbath. Naama Shafir, a fifth-year senior at Toledo, is the first Orthodox Jewish woman to play Division I basketball. Shafir, who wears a short-sleeve shirt under her jersey to keep with customs of modesty, scored 40 points in the National Invitation Tournament championship game in 2011.” We remember Tamir Goodman well. If we remember right, there was a “60 Minutes” segment on him.

Apparently, Liberman will be the first Division I athlete to wear zizit (the tassels on a prayer shawl) under his uniform! How awesome is that? And remember how Sandy Koufax — a cousin of our Founder — bravely refused to pitch in a game of the World Series because the game fell on the high holy day of Yom Kippur? And, as previously mentioned, Tamir Goodman received a scholarship to play ball at the University of Maryland but ultimately transferred to Towson because Towson changed its schedule so they didn’t have to play on the Sabbath (Friday after sundown and Saturday until sundown). Well, it seems that Aaron Liberman has given a lot of thought to playing on the Sabbath and has come to a really interesting conclusion: According to “The New York Times” article, “Liberman has decided, after much reflection and consultation with rabbis, to play on the Sabbath, the Jewish day of rest. On one Saturday afternoon, he walked eight miles to practice. ‘Actually, playing basketball is not breaking any of the 39 laws of the Sabbath,’ he said. ‘But I’ll only be taking cold showers afterward because you can’t use hot water.'”

Are you excited to watch Liberman take the court next year? Do you think he’s going to be a Division I star? Let us know your thoughts on the matter by posting below!