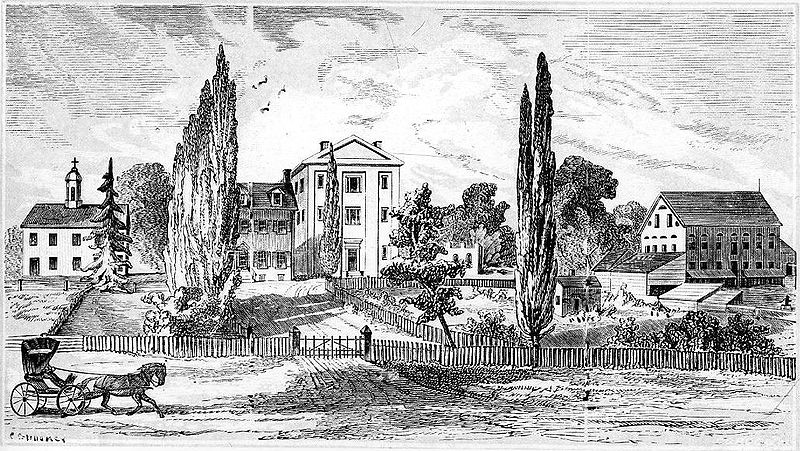 This is a picture of Villanova University way back when. Whatever. Deal with it. It’s tough to find pictures of schools sometimes. This one happened to be in the Public Domain.

Hoping to get into Villanova next year? We’ve written extensively on the pages of this college admissions blog how deep runs in March Madness so often lead to surges in applications to these universities the subsequent admissions cycle. While not a highly selective institution, we’ve used George Mason University as a case example largely because of our personal ties to former George Mason men’s basketball coach and current University of Miami coach Jim Larranaga (Brian of our firm years ago had the rights to George Mason’s improbable Final Four run and Jim’s story which he shopped to studios as a feature film — one of the few projects he’s shopped in Hollywood that did not sell — the writer of “The Replacements” was on board and everything — boo!). But this trend isn’t only true at George Mason. It’s true largely across the board and an article written by John Schoen for “CNBC” offers some great data to substantiate this assertion.

We suspect Villanova will experience a surge in applications next year. And our suspicions are based on historical data. Kind of like the historical picture above! You see what we did there?

Writes Schoen in his piece on March Madness and admissions, “They found colleges and universities that do well in the NCAA Men’s Division I basketball tournament often see a surge in applications well above the average gains during the same period for all public or private universities. The University of Connecticut felt the admissions bump twice in the last five years, following the Huskies’ tournament wins in 2011 (applications up 27 percent) and 2014 (up 35 percent)…’This trend is most pronounced for ‘Cinderella’ schools, teams not traditionally known for basketball that have unexpected success in the (tournament), or underdog teams that are not top seeded,’ the analysts found. A school doesn’t even have to win the title to enjoy a bump in applications, according to the April 7 report. In 2013, ninth-seeded Wichita State made it all the way to the Final Four before losing to top-seeded Louisville in the semifinals. Applications jumped 29 percent. In 2010, the fifth-seeded Butler Bulldogs lost to Duke’s Blue Devils by just two points. But that was enough to help boost applications by 43 percent, more than twice the national average.”

But we know the school that our readers are most interested in learning about on this topic is Duke University. That increase? 26% after its 2010 title. Kyle Singler, Nolan Smith, Mason Plumlee, Seth Curry (Steph’s bro!), and the other members of that NCAA title team — Duke’s admissions office owes you guys a debt of gratitude. So Villanova’s admissions office better start preparing their thank you notes. They can start with one to the now legendary Ryan Arcidiacono!