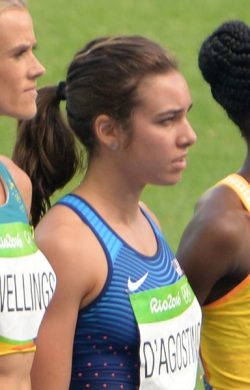 Abbey D’Agostino has made her alma mater, Dartmouth, and her country very proud (photo credit: Citizen59).

While Ryan Lochte was an embarrassment for America in Rio, there was one American Olympian who may not have won gold but she sure did make her country — and the world — proud. That American Olympian was Abbey D’Agostino, a 2014 graduate of Dartmouth College. Viewers of the Olympics may remember Abbey not for running the fastest 5,000 meter race around the track but for a gesture of goodwill, of sportsmanship that personifies the spirit of the Olympic Games. When faced with adversity, Abbey D’Agostino — who worked her whole life to be able to succeed on the world’s biggest stage for runners (the Olympic Games) — thought not of herself but for a fallen competitor. Her actions earned her the Fair Play Award, which recognizes true Olympic champions — champions in sportsmanship at the Olympic Games. And there was nobody more deserving of this award at these Olympic Games than Dartmouth’s own Abbey D’Agostino.

Abbey D’Agostino is the most decorated athlete in Ivy League history in the sports of track and field as well as cross-country. She was the first Dartmouth female distance runner to win an NCAA title. But winning gold in Rio was not to be. When D’Agostino and Hamblin both fell, D’Agostino stayed back and helped lift Hamblin to her feet in perhaps the most memorable moment of these Olympic Games. D’Agostino, struggling after the fall, would go on to finish the race (although she would fall again before the race’s finish and be helped up…you guessed it…by a woman returning the gesture, Hamblin) and even though she would advance to the final by default (because of the collision), she would ultimately have to withdraw because of an injury to her anterior cruciate ligament and meniscus.

Abbey D’Agostino, a Rio Olympic hero whose selfless actions transcend sport, has made her college and her country proud.

And if the video of Abbey helping up New Zealand runner Nikki Hamblin didn’t bring a tear to your eyes, then we invite you to watch the video of British sprinter Derek Redmond being helped to the finish in the 400 meters — after he tore his hamstring — in the Barcelona Olympic Games by his father. His father had charged onto the track from the stands, brushing aside all officials and security who stood in his way. The father and son walk around the track was, and remains, one of the great Olympic moments.