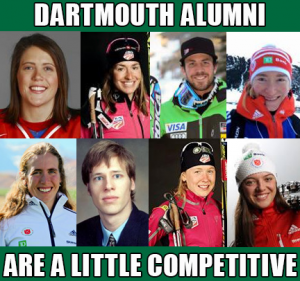 Only Westminster College has sent more athletes to Sochi than Dartmouth College (photo from Dartmouth Athletics).

From which universities do the most Olympians hail from, you ask? Well, the answer may surprise you. The answer is Westminster College in Salt Lake City, Utah (the home of the 2002 Olympics spearhead by Mitt Romney). Westminster sent off twenty-three (twenty-three!) athletes to this year’s Winter Games. Incredible, right? They’ve only got 3,100 students in all so we’re not talking about a major research university here with a football team competing for a BCS title! But enough about Westminster because Westminster has never popped up on our college admissions blog before. However, the university that is sending the second most Olympians to the Olympic Games in Sochi pops up quite a bit as it’s an Ivy League school.

Dartmouth College has sent twelve athletes to these Olympic Games in Sochi. including nine representing the United States of America and three flying the flag of other countries. This latter group includes our friend Gillian Apps as she represents Canada in ice hockey. This will be Gillian’s third Olympic games. We got a chance to touch her gold medal from 2006. She won another in 2010. We expect that she will win a third this time around, possibly her swan song for the Olympic Games.

Did you think it would be Dartmouth that sent more athletes to the Olympic Games than any school other than Westminster? Did you think Harvard would have more? Have you ever seen the Dartmouth women’s ice hockey team? Or checked out their amazing ski teams? The school literally has its own ski slope. They attract the best skiers and some of these folks go on to compete at the highest level in sport — at the Olympics.

While you’re here, check out this post on the Ivy League and the Olympics.