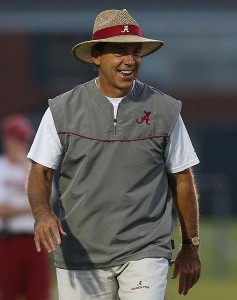 Nick Saban is regarded as one of college football’s greatest recruiters. But is he always honest with his recruits? Who knows. His former recruits are welcome to write in!

We recently wrote about how college applicants should rarely trust college athletic coaches and we went into some detail just why this is the case. Ivy Coach is not unfamiliar with stirring up controversy in the admissions world. We speak the truth and if some folks don’t like it, well that’s just too bad. If a parent wants to live in a bubble in which their kid’s college essay about volunteering at a hospital is a great idea, then so be it. As the saying goes, we can lead a horse to water but we can’t make that horse drink. If a college coach thinks athletic coaches who over-promise and under-deliver in admissions is the exception and not the rule, then we sure do hear about a lot of exceptions. So many parents and students come to us as clients after they are let down by college sports coaches who promised they’d get in via Early Decision or Early Action…but this doesn’t turn out to be the case.

Are there coaches out there who are honest? Of course there are! We cited Duke’s Coach K as a case example in honesty and transparency. But quite a number of college sports coaches are dishonest in the recruiting process as well. We used the word ‘rarely’ in the title of our post to qualify that not all college sports coaches are dishonest. But a good number sure are! Anyhow, a reader of our blog wrote in the following: “We would caution creating general mistrust between families and collegiate coaches. In an admissions market as political as ours, this will no doubt damage recruits’ chances – as character becomes an issue after objective standards are met. However, we appreciate your newsletter and knowledge base; just consider this a letter to the editor from an interested reader.”

While we appreciate the gentleman for reading our college admissions blog and for his thoughtful note, we utterly disagree with him. College coaches lie. Do all of them? No. Do some of them? Yes. It can often be difficult to know whether a coach is telling the truth or lying about his intention to help you get in as a recruit. So in college admissions — and in life — we encourage students to play it safe. Assume the coach is not going to go to bat for you in admissions. Can you still get in, without the coach’s help? Are your essays still outstanding? Are your grades and test scores top notch? Do you have another extracurricular hook in addition to the sport? Maybe you were, say, an Intel Science Talent Search finalist? What harm is there in making sure that you can get in on your own, no matter what the coach may say. There is no harm. It’s that simple. We’re not trying to “create general mistrust.” We’re simply advising students to trust themselves, to go to bat for themselves, to put themselves in the best position possible to gain admission to their dream schools no matter what a college athletic coach might say.