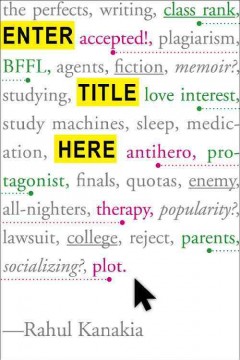 A young adult fiction book on college admissions was reviewed in “The New York Times” by the author of the “Gossip Girl” book series.

We came across a book review in “The New York Times” that we wanted to share with our readers. The book entitled “Enter Title Here” is a YA novel (young adult) that features a protagonist, Reshma Kapoor, navigating the highly selective college admissions process. It’s written by Rahul Kanakia who, it should be noted, is not a high school student — he’s older. Apparently, Reshma, the protagonist of Kanakia’s book, goes to high school in a Silicon Valley suburb and dreams of attending Stanford University. But her SAT scores aren’t high enough, so she needs a hook, according to the review by Cecily Von Ziegesar. And if Cecily Von Ziegesar’s name isn’t familiar to parents, it likely is to the young adult readers of our college admissions blog. After all, she’s the author of the “Gossip Girl” series of novels, on which the series on The CW was based.

Anyhow, back to Reshma. Here’s what Cicily writes of the book, “Early on, Reshma writes a synopsis of the action to come in which ‘an introverted, studious Indian-American girl . . . starts doing all the regular American girl stuff that she always used to ignore: making friends, going to parties, drinking, dating, falling in love, having sex, etc.’ That may remind you — it reminded me — of ‘How Opal Mehta Got Kissed, Got Wild, and Got a Life,’ that decade-old debut novel about an ambitious suburban Indian-American girl who did all of the above in order to get into Harvard. ‘Opal Mehta’ was, of course, pulled from the shelves after its teenage author was accused of plagiarism. T.S. Eliot said, ‘Good writers borrow, great writers steal.’ Perhaps Kanakia drew inspiration for “Enter Title Here” from the story of that novel and its author (who by the way graduated from Harvard and is apparently doing just fine). Or not.” Cecily, you do not disappoint in your reviews.

We can’t help it. We must share more of what the “Gossip Girl” book series author had to say about this YA book about a young Indian American woman trying to get into Stanford: “Metafiction like ‘Enter Title Here’ prevents the reader from escaping fully into the story. It’s meant to make you uncomfortable, and Kanakia made me uncomfortable in so many ways. Is he making fun of every young adult novel ever written? Is he making fun of ambitious teenage girls? Is he making fun of me? As she starts to wind down her novel Reshma writes, ‘My whole life, whenever I’ve done something intelligent or bold, I’ve always thought, Stanford will appreciate this.’ In that one line I felt Kanakia ache for me to ache for Reshma. Alas, I did not; but I’m very confident she’ll do just fine.”

We can’t help but find Cecily’s words rather hilarious. And just as Cecily didn’t ache to root for Reshma to get into Stanford after reading the book, confident that she’d do just fine even if she didn’t get in, admissions officers don’t ache to admit applicants who devote their life to try to earn admission to college. Writing a book about navigating the highly selective college admissions process? While fictional, it’s not exactly a good hook for an applicant to Stanford. Not all hooks are good hooks. And this one happens to be a very bad hook. And apparently, based on Cecily’s not so subtle review, it’s a not so good book too. But then again, we haven’t read it and it’s not on our late summer reading list either. We did however read the book on which the movie “Admission” was based and we liked that one. So if you happen to be looking in a bookstore for a YA book about college admissions, go with that one? Because obviously finding a YA book about college admissions was on  your agenda for the day.

Book Review: Who Gets In And Why