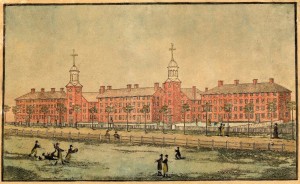 Yale application numbers are up from the time of this portrait of Yale’s campus but down from last year. Earlier, we had predicted in “The Yale Daily News” why applications dropped. And while we received some flack for it, it turns out that our prediction was indeed absolutely correct.

Over the years, we’ve received some flack for stating that rising application numbers at highly selective colleges are not an indicator that these colleges are getting more selective in their admissions policies. Rather, these colleges are simply getting better and better at marketing themselves to applicants who have not even the slightest chance of ever getting in. Much of this marketing is done through college brochures. And why would they waste their time doing such a thing? Because it’s not a waste of time at all. Not in the least. The more students who apply to a highly selective college, invariably the lower the admission rate will be and the higher that university will rank in the all-important “US News & World Report” college rankings. It’s a point we’ve made over and over again on our college admissions blog, in the press, and anywhere else where we can lift our voice to get the truth out there. Brian Taylor, Director of Ivy Coach, made the point last week on the pages of “The Yale Daily News” in an article on Yale’s application tally coming up a bit short this year.

One person wrote in questioning our logic about the fall in this year’s Yale application numbers. The essence of what they wrote was this: If colleges are getting better and better at marketing themselves to unqualified applicants and this explains why applications go up, up, and up more each and every year, then this fall in applications at Yale makes no sense. While we appreciate the point, here is our response to this criticism. And we will quote an article on the Ivy League application figures in “The Boston Globe,” a most reputable news source: “Yale said its applications had declined 2 percent from the previous year because it reduced the number of mailings to prospective students.” And there you have it. From the horse’s mouth itself. Let’s repeat that. It’s not from our mouth. It’s from the horse’s mouth itself. Yale’s applications declined this year because they reduced their mailings. The office of admissions at Yale, whether knowingly or not, confirmed our argument. As the kids like to say, “Duh!” Give us flack for saying it, but that doesn’t mean it isn’t true and we can withstand your flack anyway. Bring it.

Just as medicine improves each and every year, sometimes experimental treatments are tried that don’t work. The results of these experimental treatments (like this year at Yale) do not take away from the body of evidence that suggests medicine gets more and more advanced each and every year, that treatment and treatment outcomes tend to improve across the board over the years. So, yes, these numbers can fluctuate from time to time because colleges like Yale try new things. Sometimes they’ll market a bit less like Yale did this year in a cost-cutting, targeted move. And sometimes they’ll market more. We applaud the schools like Yale that choose to market less. But, regardless, the fact is that there is a high statistical correlation between application numbers and marketing. When marketing goes up, applications go up. When marketing goes down, applications go down. In statistical parlance, the p-value is less than .001.