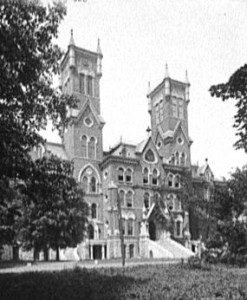 Two former Vanderbilt football players have been convicted of rape.

Vanderbilt University made news in the admissions world when the university opted to extend its Regular Decision deadline recently. But there is more significant news coming out of the Nashville, Tennessee based university this week. As you may know, two former Vanderbilt University football players were found guilty on Tuesday of raping a female former Vanderbilt student. Two more former football players await trial. The duo convicted of rape on Tuesday essentially tried to cower under a defense that they were too intoxicated to know what they were doing, that a college culture of sexual promiscuity and binge drinking contributed to their heinous actions. It sure sounds similar to the absurd “Twinkie defense” used in the trial of the assassin of Harvey Milk. In this case, we’re not quite certain why it took the jury three hours to convict these two young men but we sure are glad that justice was served.

As we write on issues of college admissions, we figured we’d raise the following question: How will this crime committed by former Vanderbilt students impact the university in the years to come, particularly from the standpoint of admissions? Many students and parents unfortunately still associate Duke University with the rape case in which three Duke lacrosse players were falsely accused of rape, an erroneous claim that caused harm to their reputations as well as to the Duke University brand (particularly in light of how Duke handled the case). While the Vanderbilt rape case — in which a rape was actually committed — has not received nearly the attention that the Duke case received several years ago, the national media has picked up on the story nonetheless.

And another highly selective university is in the news now as well because a student has been accused of rape. A (now former) Stanford University swimmer who competed in the United States Olympic Trials in 2012 is being charged with raping an unconscious woman on the Stanford University campus. In this particular instance, two Stanford students riding by on their bicycles saw the alleged assault taking place and intervened. The swimmer took off and was chased down and apprehended by the intervening students. We at Ivy Coach salute those two Stanford University students for stepping up and taking action when they saw a grave injustice taking place.