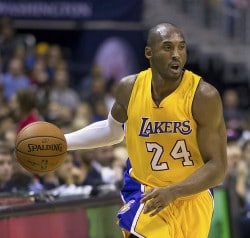 Kobe Bryant miraculously scored 60 points in his NBA finale. He went out a winner. And so should a student admitted to Harvard, Yale, Princeton, or Stanford in the Early Action round (photo credit: Keith Allison).

There was a piece in “The New York Times” a couple of days ago in which a high school student laments how students apply to too many colleges, only making the process more stressful and more competitive. The student, Peter Kang, is right. But we’d like to make a smaller point. If a student wants to apply to 15 colleges in the Regular Decision round, that student has that right. Most of the time when a student applies to so many schools, they choose to cut and paste admissions essays, using the same essays for all schools. And this, of course, is a most unwise move. Colleges want to be loved. They want to feel special. A student can apply to 20 schools through the Common App. but this student isn’t going to have much luck with any of these schools should they follow this game plan. And while we empathize with Peter Kang’s frustration, what frustrates us is when students apply to schools they have no intention of enrolling at.

We have students every year who in the Early Action round earn admission to the likes of Harvard, Yale, Princeton, and Stanford. They apply to their top choice school in the Early round, when the odds are much more in their favor. And with our help, they earn admission. And they’re so happy. They jump up and down. They figure out ways to surprise their parents with the news. They call us a full eight seconds after learning of their decisions. But then — for a select few — the excitement fades and they want to figure out if they can earn admission to other schools. But a student who is admitted in the Early round to Harvard is not going to end up going to Duke or Brown even if they should earn admission. A student admitted to Stanford is not going to choose Cornell. It’s just not going to happen. Why can’t these students just be happy? It’s a lesson that applies beyond college admissions. It applies to life. High achieving people are quite often the least happy, we’ve been told. And we at Ivy Coach suspect we can discern a student’s future happiness in life right here in this moment — if they choose to apply to other schools after getting into one of America’s best or if they just soak it in. Be a soaker-iner!

Be like Kobe. If you get into Harvard, Yale, Princeton, or Stanford in the Early Action round, your college admissions process should be over. 60 points is 60 points. There is no need to collect more feathers for your cap. #MambaOut

So why are these students doing this? Often times, they’re doing it to boost their egos. And unless they genuinely aren’t sure which school they should attend and they’re truly vacillating, we strongly discourage our students admitted to schools like Harvard, Yale, Princeton, and Stanford from applying to other schools in the Regular Decision round. Why do they need the ego boost? They already got into one of America’s very best institutions. They’re only taking a potential slot away from another student who actually might have every intention of enrolling once admitted. And that’s a pet peeve of ours. Why not just be happy you got into Harvard, Yale, Princeton, or Stanford? These are moments that don’t need a follow-up. Kobe Bryant scored 60 points in his NBA finale. He never has to pick up a basketball again. He will always have that last game. And so will we all. Thank you, Kobe. #MambaOut